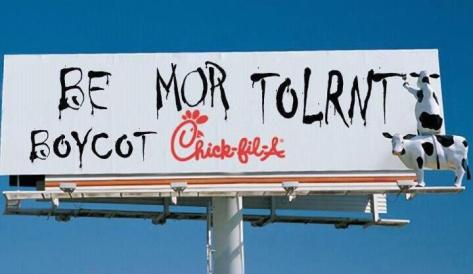 Ah Yes! Tolerance! The one thing we cannot tolerate is intolerance.

The evangelization of culture is all the more important in our times, when a ‘dictatorship of relativism’ threatens to obscure the unchanging truth about man’s nature, his destiny and his ultimate good — Pope Benedict XVI, Glasgow Scottland, Sept. 16, 2010

Pope Benedict coined the expression “Dictatorship of Relativism” during his homily in the “Mass for the Election of the Roman Pontiff,” on April 18, 2005. It has often been the assumed that the theme of “counter-relativism” is one of the driving lines of his Pontificate. Perhaps so, in a certain sense. He has made strong statements on the theme of relativism many times in the past, calling it the “Central Problem for the Faith Today.”

However, I would like to suggest that, although the Pope wants us to be aware of the insidious threat relativism poses to our culture, his emphasis is more on the importance of bolstering the faith. His main thrust is on the evangelization of culture (the way he beings the quote cited above).

That’s why I just Luv Chick-fil-A!

Chick-fil-A has always been a values-based company. Being from Georgia, I’ve long been familiar with the franchise — since about the time I could pronounce the words “Eat Mor Chickn.” One of the first things a southern boy learns about Chik-fil-A is that you can’t eat there on Sunday. It’s not open. And if you have not yet been pre-disposed to call that radical, fundamentalist, Bible-thumpin’ fanaticism, you just simply understand this company’s got standards and principles. A young mind brought up in the faith just gets it. You don’t have to explain it to him. The culture itself evangelizes, once the culture has been evangelized. The effect is what we call education.

Maybe I’m being dogmatic here. I’m might be the one who just doesn’t get it. Someone would say I’m probably just a washed-up Gen-Xer, who’s bought into his own set of culturally preconditioned ideas about God and culture, lost somewhere between the first StarWars movie and Nirvana.

According to the ultra-tolerant mainstream mindset (so it seems), you are either a navel-gazer, a reactionary, or “one of us.” Realistically, what does that mean?

It’s okay for Starbucks to express their support of homosexual marriage — to fund it’s being passed in to law. It is bigotry for a company like Chick-fil-A to state that they would not support such a policy (which is all they actually said) based on their system of values.

When Home Depot helps pass the legalization of gay marriage in New York, that goes virtually unnoticed. When Chick-fil-A says:

Rahm Emmanuel must react swiftly, the Mayor of Boston moves to bar them from the city, and The Muppets cancel the Show!

Your opinion counts in the dictatorship of relativism if and only if you have the right opinion: Theirs. They preach tolerance and diversity but will not tolerate a diversity of opinions.

And eat mor chickn. Unless you’re a vegan, in which case you don’t have to (Am I not tolerant?).

Below are some links to mor Chick-fil-A articles (good ones) from bloggers who appear to be just as opinionated as I am. I think they make an excellent point. If a picture is worth a thousand words, check out the blog from Twitchy and keep scrolling down. Yur boycot ain’t workn.

And just to leave you with a smile… enjoy the video!