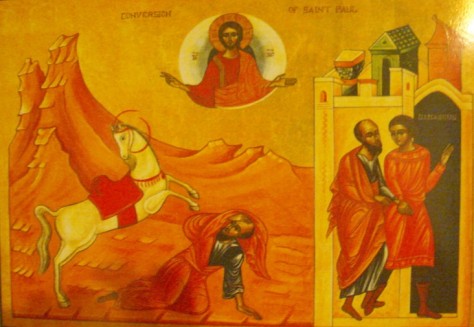 It may be a matter of sheer coincidence, but today’s Gospel reading and the readings for yesterday’s feast, the Conversion of St. Paul, have a lot in common. They are both pretty strange vocation stories.

Very few people have the sort of “knock you off your high-horse” conversions that Paul had (Saul, rather). God does not often reveal himself to people with a blast of blinding light and a voice from heaven telling them exactly what to do.

It is not as though Paul did not know who Jesus was at all, even though this revelation made it known to him that he really did not know him. But after all, if he did not know about Jesus and his followers, why would he have been on the road to Damascus in the first place. Some knowledge of Christ was necessary in order for this all to happen.

The same thing goes for the first Apostles. The Gospel opens, “When Jesus heard John had been arrested…” Now, John the Baptist had already pointed Jesus out to a couple of his future Apostles. They certainly did know who Christ was. So when he called them that morning on the Sea of Galilee, they already had some sort of an idea what they might be getting into.

As usually, the Gospel leaves a lot open for our imagination. It does not fill in all of the details, because the Holy Spirit leaves room for us to place ourselves into the Gospel context. Note that this is exactly what naturally happens when we read this Gospel (or the account of Paul’s conversion). We visualize the scene, we visualize the brightness, and we somehow put ourselves in the Apostles’ shoes. And then we find ourselves faced with a question.

That question is, how is it even possible for a person to just drop everything, immediately, at a moment’s notice to follow God? How could they do that? Could I do that?

Perhaps, God is already asking this from you. Perhaps he asks you for this several times a day. The question is, when God calls, how do you respond?