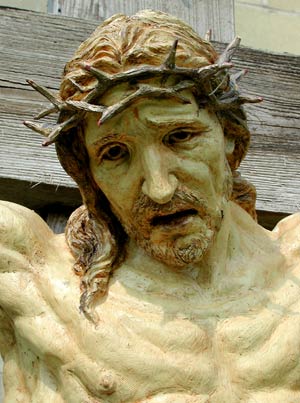 Jesus is in a state bordering on total collapse. His body aches in excruciating pain; each time he pulls himself up to breath, the median nerves are tweaked on the nail, and an explosion of fire erupts up his arms and into his brain. Still he has yet to think of himself; there is no egotism in him at all. His first words were ones of forgiveness. His second were to console the thief suffering beside him. The third were for his mother, and in extension, for us and his Church. His fifth were a cry to the Father, quoting the Psalms. Only now—finally—does he ask for a respite. He thirsts.

After so many tortures, after so much loss of blood, after so much sweat, after such a fever, he thirsts. He has refused the analgesic drink offered him of wine mingled with myrrh and gall, prepared for him by the charitable women of Jerusalem. He has neither eaten nor drunk anything since the evening before, and it is now midday. He thirsts. His mouth is half-open and his lower lip has already begun to droop. His throat is dry and on fire, but he can no longer swallow. “And I looked for one who would grieve together with me, and there was none; and for one who would comfort me, and found none; and they gave me gall for my food, and in my thirst they gave me vinegar to drink.” (Psalm 68: 20-22)

If the soldier had not raised the sponge up to him, we would have rushed forward to alleviate his thirst. How we wish we could do it! But we still have a chance. Did Christ not say that when we give food to the hungry and drink to the thirsty we do so for him? When he speaks of charity to others he does so as a cup of water given to others in his name.

Here in the States, full of wealth and materialism, the greatest lack that people experience is God. Many are like travelers lost in a desert under the boiling sun; the agony of their thirst has driven them mad.  A lot of what we call madness in today’s world is in fact the manifestation of the thirst that all people have for God; a thirst that is not being satisfied.

As we stand under the cross of Christ and hear him ask us for a drink, let us not hesitate to run forward and satisfy his thirst—his thirst that is found in the spiritual needs of those around us.

During Holy Week, I will be posting a daily reflection on the 7 Last Words of Christ.