The Christmas season is a great time to visit museums. Today I joined a group of my students at the Metropolitan Art Museum in New York, where I stumbled across a real gem of a painting by Vincent Van Gogh, a portrait of Madame Marie Joseph-Michel Ginoux: 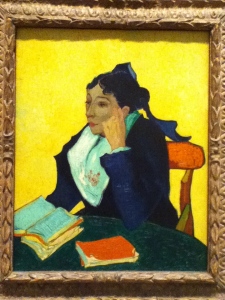 While most people see Van Gogh as avant-guard trendsetter, he’s actually quite a purist. He somehow manages to stick to the old, redefining it as new. He’s the prototype of the post-modern, soul-searching artist.

The subject, Madame Ginoux, owned a cafe in Arles, the quaint French village where Van Gogh spent a year of his life producing many of his most celebrated paintings. The fact that she’s an ordinary person is one of the things that makes this painting special.

Up until the late 19th Century, most European portraits depicted nobility or religious figures, since those were the patrons who contracted the greatest artists, built their reputations, and kept them from starving. Marie Ginoux wasn’t a duchess or the wife of a rich patron. She was just the owner of a local coffee shop where Van Gogh went for an occasional latte. She did not pay for this portrait; the artist gave it to her as a token of friendship.

Among the other interesting things about this painting are the woman’s posture, her books, and that hideous yellow back ground.

The body language is pensive. She’s a thinker. The positioning of the hand between the chin and the temple tells us that she is a contemplative and reflective person.

The books tell us that she is an educated person as well. Van Gogh adopts this element from a longstanding European custom in painting. Books were included in paintings to show that the subject was a scholar. In keeping with tradition, Van Gogh uses the books to tell us that Marie Ginoux was an educated person. She was a working woman who probably did not have much leisure time, but when she had a spare moment she like to read and reflect.

The astonishing thing is that the subject is a woman. Why is that so astonishing? Because up until the late 19th Century, we only saw books in portraits of men. Van Gogh is one of the first to present a woman in this setting. More than just a trendsetter in art, he was a visionary of social changes that we now take for granted.

But that ghastly yellow background! What on earth was he thinking?

It’s Tradition with a capital “T”. In fact, the gold background is taken straight from the classical Byzantine icon.

Where else do you find flat gold backgrounds in the history of art?

So exactly what is Van Gogh saying with this portrait? Is he secularizing the sacred or canonizing the ordinary? Or both?

Van Gogh was a religious man, studying to be a preacher, before he had his first mental collapse and undertook his career as a prolific Bohemian artist. During his stay in Arles, his paintings are bereft of religious subject matter. Instead, we find the commonplace elevated to the sublime through Van Gogh’s mastery of divinizing effects. He brings the ordinary to life in an attempt to satisfy our thirst for transcendence, in all his paintings, and he does so without reference to God.

That’s secularism in a nutshell — exalting the banal to sacrosanct proportions to fill the religious void. Van Gogh’s portrait of Marie Ginoux also illustrates how secularist movements draw on religious traditions and concepts to achieve their purpose.

The reason I like this painting is that it affirms the significance of religious symbolism in the very act of implementing it to achieve the opposite end. In the attempt to move beyond the orthodoxy of religion, it points back to longstanding religious traditions in art, which still stand today.

The orthodox traditions that persist in secular art are not only a testimony to the forcefulness of historical convention. They do not only hearken back to our great heritage of religious art. They also serve as keys to dialogue with long-lost secularists, who only entrench themselves more in our tradition the more they try to break from it.

As long as we still relate to the same concepts, we can speak the same language. We can use their terms — which are really ours — as tools for evangelization. After all, what is an icon, if not a window into the world of the sacred?