Answer #1: In order to save us and reconcile us with God.

The Church teaches—and our own experience confirms it—that we live in a world of sin. We need look no further than the chaos of the last century or the heaviness in our own hearts to see sin’s effects. 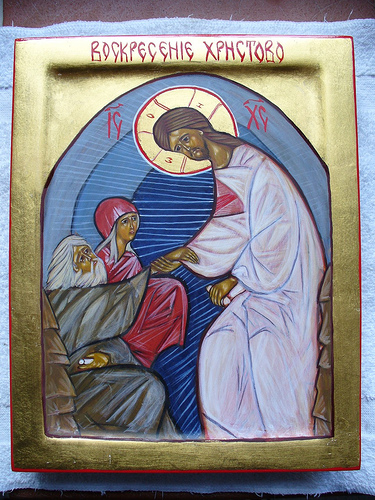 Yet, as hard as it is for us to imagine, since it is so far beyond our own experience, this was not God’s original plan for the human race.

God’s original plan was for us to be blissfully happy, close to him, and this plan hinged on human freedom and a few simple rules. Yet our first parents freely chose to separate themselves from God. God’s original plan for humanity ended because of their own free choice.

At this point our skeptical modern minds, keen on finding the biltrix hidden in things, naturally say, “Come on! The eating of an apple and the ruin of the whole human race? Nice try, but way over the top.”

So, in order to see the malice of their sin, we have to look into their minds and see the enormity of their sin. We must remember the perfection of Adam’s nature: Clear intellect; unclouded by passions, he understood thoroughly his dependence on God and his duties towards him. He knew too that his sharing in God’s life by grace was dependent on obedience to God, and he clearly understood that if he lost that friendship by sin, grace was lost not only for himself but his offspring. Knowing all that, he calmly and deliberately decided to rebel against God’s express command, and by his pride and rebellion he rejected God’s plan for the happiness of the whole human race.

Force is not part of God’s pedagogy. He is not a dictator or a tyrant. He never imposes but always proposes. He proposed blissful happiness and asked obedience. And when one proposes the other can accept, or not—as ever nervous gentleman who has made a marriage proposal knows. Love demands freedom and a free response, a gratuitous giving of self, and this is something that can’t be forced.

Adam and Eve responded no to God’s proposal and so sin and its effects entered the world. What was God’s response? Condemnation? Abandonment? To start over? No. That is to human.

God’s response was to make a new proposal. Since our first parents had rejected his initial plan for their happiness God decided to glorify himself through his mercy. His new proposal was to draw near to man again, by becoming one of us, and redeeming us. Who among us can resist a baby? This is God’s proposal so strikingly revealed at Christmas; a new invitation, made in love, to a new life in Christ, thus reconciling us with the Father.

Saint Gregory of Nyssa summarizes it nicely when he writes:

“Sick, our nature demanded to be healed; fallen, to be raised up; dead, to rise again. We had lost the possession of the good; it was necessary for it to be given back for us. Closed in the darkness, it was necessary to bring us the light; captives, we awaited a Savior; prisoners, help; slaves, a liberator. Are these things minor or insignificant? Did they not move God to descend to human nature and visit it, since humanity was in so miserable and unhappy a state?” CCC457