When I heard about Amelia’s story, it immediately reminded me of the movie John Q. The protagonist, played by Denzel Washington, is a loving Father who exhausts all licit means to get his son on the list for a heart transplant operation, to no avail. He then resorts to hijacking a hospital emergency room at gun point until his demands are met. In the end, he attempts to take his own life, in order to donate his own heart to his son.

Unlike John Q., Amelia’s story isn’t about healthcare insurance. Amelia has Wolf Hirschhorn Syndrome, a disease that can cause brain damage and organ failure in children. Because Amelia is mentally retarded, her doctor refused to recommend her for a kidney transplant operation and, without the doctors recommendation, the hospital will not even put her on a list for a donor. If she does not have the operation she will die.

In other words, she is being denied the chance of having a life saving operation because she is mentally retarded, or as her doctor put it, she is not eligible because of her quality of life.

I fully agree with the man in this video that it’s a complicated issue, not simple to resolve. There’s a countless list of people waiting to receive a donated kidney. Amelia does not even have a chance of getting on that list. That’s unjust.

The question should not be about just how far a hospital committee is obliged to facilitate families with their children’s needs. Sure, no one “owes” anybody an organ donation. But must we be so fixated on the structures of human justice that we so easily overlook a higher law? No one has greater love than to lay down one’s life for one’s friends. 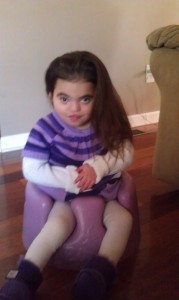 Speaking of selfless love, Amelia’s story also reminds me of my friend Rick.

Rick was the executive director of a private school in Atlanta. When he learned that the father of one of the girl students was close to dying of stage 5 kidney failure, he went to visit the man at his home.

As they were talking, Rick was moved to donate his kidney to the man. It turned out their blood and tissue types were a perfect match. Ten months later, they had the operation.

Not only was the operation successful, but also the recipient was so inspired by Rick’s examplary charity,that he volunteered for medical research tests aimed at helping dialysis patients. That’s what you call passing it forward.

Wouldn’t it be wonderful if Amelia’s story could have such a happy ending. It can. Where there’s courage and love, there’s always hope.