Yesterday would have been Immanuel Kant’s 288th birthday. 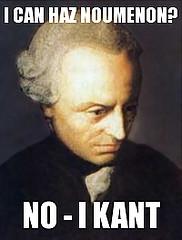 Today we will honor him with a brief reflection on his Duty Ethics (Deontology).

Kant, of course, is well known in epistemology for his distinction between Phenomenon and Noumenon — the representation of the thing known in thought and the unknowable thing-in-itself in reality — presented in the Critique of Pure Reason. He is also known, in ethics, for the Categorical Imperative, the basis of his deontology, in the Groundwork of Morals and Metaphysics and, subsequently,  the Critique of Practical Reason.

[PG-13 – Because children under 13 don’t read Kant, unless they are German]

Now, let’s pretend that we are not robots for just a moment and consider the following scenario.

You are living in Rwanda during the genocide in the early 90’s and you are hiding Immaculee Ilibagiza and three other girls of the Tutsi tribe in a small bathroom in your house. Militia from the Hutu tribe come to your home having heard rumors that you are hiding her there. They demand, “We know you are hiding her! Where is she?”

If you tell the truth, they will brutally kill Immaculee, the other girls, and maybe you and your family as well. If you lie and say, “I don’t know where she is, but she isn’t here,” you might save everyone’s life.

Immanuel Kant would say that it is immoral to lie in this or in any situation (and he is right about that). So you would have to tell the truth and allow her and her friends to be brutally killed.

Of course, if that is what had really happened, the world would not have received her faith-filled testimony,  Left to Tell. Something just does not seem right about that.

So there must be a subtle distinction that we are missing here… What is it?

If you still agree with Kant and find deontology simple, clear, and robotically straightforward, here’s another puzzle:

The answer to this week’s sudoku will appear next Monday…