I’ve heard many reasons for this; recently came across one that really moved me. I’ll save that one for last. For now, I will say that I learned it from this guy:

More on that later. First I want to comment on his fish, and the radical phenomenon that this fish — the IXTUS fish — has aroused.

IXTUS: Greek for fish and Greek acronym for Iesus Xristos Theou Uios [kai] Sotor: Jesus Christ, Son of God and Savior (Yes I am aware that the X — Greek letter Chi — is normally transliterated as Ch rather than X, but you get the point).

Legend (or tradition) has it that the first Christians used to carry around fish as a sign that they were Christian. I believe we’ve discontinued this tradition, because of the way fish smell. Now we decorate our cars with fish ornaments, like this:

Some people really get into it and do things like this: 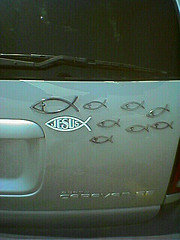 These outward signs of faith are designed not only to bear witness of one’s personal belief and devotion; they are also designed to raise questions in other people’s minds. That’s when people start getting creative, and come up with things like the following: 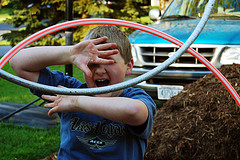 Of course, anyone who’s ever driven on the interstate or parked at the local grocery store is familiar with these things too:

And such like fooleries. Beyond all the mimicry, there’s a deeper truth that these sign bearers tend to overlook, perhaps.

The lesson, for me at least, we don’t just abstain from eating meat on Friday during Lent. We continue our abstinence year round on Friday (with some exceptions, such as the Christmas and Easter Octaves), not because it’s a dietary restriction that makes us impure otherwise. That was never the reason for abstaining from meat. Aside from being a small form of sacrifice, abstinence from meat should be seen as a remembrance of Christ’s passion.

And, now, I’ve just learned that when I choose to eat fish on Friday, I am also remembering the Resurrection — the Risen Jesus ate fish!

Now for something completely different (sort of). Yesterday, as I was mulling things over, I came across this sign during a trip to the city (NYC):

I convinced my friends that we had to go there for lunch, which we did. Here’s my review: If you are ever in Manhattan at Amsterdam and W125th Street, EAT AT JESUS’ TACO! You’ll be glad you did. They don’t have fish tacos, unfortunately, but they do have shrimp tacos, which one of my friends said was well worth ordering (I had a steak burrito instead, and it sure beat Taco Bell). The owner, goes by the name of Jesús, but he’s actually a Chinaman named Hong. Go figure. The food, however, is fabulous, so…

Sorry for the gratuitous ad. There was some connection deep in my imagination between what I was saying about fish and Jesus’ Taco, but I could not find a way to articulate that without going too far off on a tangent.

I guess the take-away would be this. If you are looking for a good restaurant on a Friday, there are plenty of reasons to make it a seafood restaurant or to order an anchovy pizza. It’s just a simple yet profound way to exercise your faith as you start the weekend. 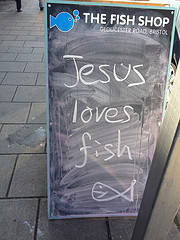 But he loves you more!