They’re coming out of the woodwork. So much for the boycott.

It goes to show, we should never be afraid to stand up for our principles in public. CFA did not intend this outcome when they made their position known about the value of traditional marriage. They should have expected the initial outrage from a noisy few. What they ultimately got was record breaking sales. 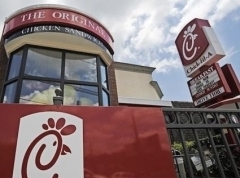 Now the competition wants a piece of the chicken-pot-pie. Her’s a tweet from Rick Warren to this effect:

“Somewhere, a Burger King ad man’s toying with the idea of having “The King” declare himself “100% pro-life.” LOL — See on full article on hotair.com

WARNING: Fr Matthew Green, my first commenter below, just pointed out that this is a Photoshop job. Scams! Gullible-me… I’m leaving this here as a public service warning. The rest of the article remains unchanged. Comments?

Yesterday I posted a picture on Facebook with McDonald’s, Wendy’s and KFC bilboards (like the one above) voicing their support for CFA. I got lots of comments on that post. This morning, when I checked my FB page, that picture had been taken down. Maybe this is because these chains really don’t support their competition (or maybe it’s just Facebook).

At any rate, here’s a look at what the competition would like to see back at their own stores:

CFA competitors have a reason to be scared. Now the secret is out: Chick-fil-A holds high standards and produces an all around better product:

If you can’t try it yourself, because there are not CFAs within driving distance, I have a suggestion:

Try grilling out instead!

Tomorrow I will post my simple recipe for one of the easiest to prepare and best tasting home cooked meals you will ever make: Beer-Can-Chicken!