Welcome to the “real world,” Kid.

When most americans hear the word tradition, here is what immediately comes to mind:

Welcome to the Thanksgiving Day Parade!

For a sophisticated few, the word tradition conjures up an image like this:

To educated elites, the word tradition looks something like this:

And if you are Catholic… For a good many it comes down to two things: 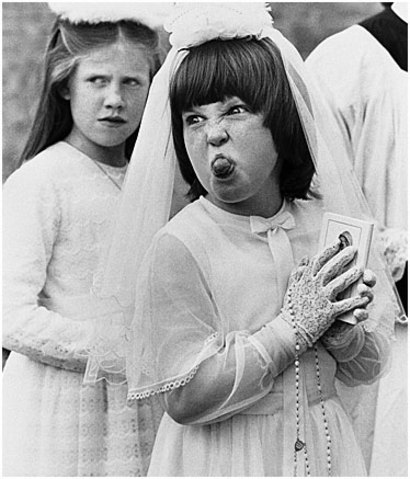 And that’s about it.

The message I took away form Fideler on the Roof was “Traditions: we can’t live with them and we can’t life without them.” From the onset of the play, Tevye and his daughters begin to question their longstanding traditions. Traditionally, marriages were arranged in their quaint little town and no one ever questioned that tradition. Once Tevye decides to break with that tradition and marry Tzeitel, his oldest daughter, to the boy she loves instead of the old man chosen for her by the matchmaker, everything else begins to spiral out of control. Inevitably, his second oldest daughter, Hodel, acts on this precedent to persuade her Father to allow her to marry a Marxist. Eventually, the unspeakable happens. Chava, his youngest daughter elopes and marries an Orthodox Christian. In protest, Tevye disowns her, vows never to speak to her again, and tells the the family to consider her dead.

In the end, the Christian government, drives the Jews from their homes. The family is disintegrated. Leaving his three oldest daughters behind in the diaspora, Tevye and his wife Golde depart for America with their two youngest daughters. At Tevye’s beckoning nod, the nameless fideler follows them out of the village, signifying that they are taking their broken traditions with them.

How so? Hearkening back to the opening scene, the sage Tevye ends the sequence with a prophetic reminder: “Traditions, traditions. Without our traditions, our lives would be as shaky as… as… As a fideler on the roof.”

Traditions. We can’t live with them and we can’t live without them. Tradition by itself is like a one-legged stool. Without tradition, we are left with a two-legged stool, at best. To maintain a proper balance, we ought to consider the role of tradition in a stricter sense, but with a much broader context. Here, I am talking about Sacred Tradition with a capital “T.”

How can considering the Sacred Tradition of the Church teach us about tradition in general? Doesn’t it make better sense to understand what we mean by tradition first and then see how that applies specifically to Tradition in the Church?

I would like to propose that Tradition with a capital “T” serves as an exemplar for tradition. In Verbum Dei, the Second Vatican Council’s Dogmatic Constitution on Divine Revelation, we are presented with a model that looks more like this:

This model is not quite perfect but it is a start. I would like to follow up tomorrow on the question I raised here, using this text from Verbum Dei as a starting point:

“It is clear, therefore, that sacred tradition, Sacred Scripture and the teaching authority of the Church, in accord with God’s most wise design, are so linked and joined together that one cannot stand without the others, and that all together and each in its own way under the action of the one Holy Spirit contribute effectively to the salvation of souls.” — VD, II, 10.

If we can understand how tradition functions within this context, we may be able to apply it to other aspects of our lives and save countless other important things as well.