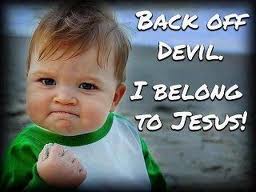 Okay.. Remember what I was saying about memes the other day? Scratch that (partially). Baby memes are still cool!

You know, when I make it to heaven (God willing), I don’t think it will be just Saint Peter waiting for me at the pearly gates. I expect I’ll have this awkward confrontation with the other 11 Apostles and Paul and I’ll probably have a lot of explaining to do. I imagine it will sound something like this:

But really you can’t blame me. I’m just taking what I read in the Gospel and telling it like I see it. You have to admit, the Apostles gave us a pretty shoddy example sometimes.

For instance, in today’s Gospel reading, Jesus warns the Apostles: “Dearly beloved friends, you need to prepare yourselves. I said it before and now I am telling you again: The Son of Man is to be handed over to men and they will kill him, and three days after his death the Son of Man will rise.”

The next thing you know the Apostles are bickering and boasting, manifesting all sorts of oneupmanship, acting like…

Acting just like we act sometimes. And that’s always the point. Our Lord’s patient rebuke to his Apostles always serves as a kind reminder for us:

I am sure these words of Christ leave most of you wondering, as it leaves me wondering, as it probably left the Apostles wondering too. Placing a child in front of them as an example, Jesus sends more than a message; he dumbfounds the Apostles. Because children have an uncanny way of stifling with their simplicity. Here is a beautiful example of what I mean: “Becoming like a Child,” which I read today on 8 Kids and a Business.

It makes you think. To be a child again — what would that be like? A lot of good it would do us to meditate on that message of simplicity Christ places before us.