There are two ways to look at the “Tolerance of Political Evil” issue; one is not acceptable, the other is, although it is not optimal for the very reason that it involves the tolerance of evil, which we would prefer not to tolerate at all. I see the Al Smith invitation as an instance of the latter.

The type of political evil we never tolerate is one that involves intrinsically evil behavior. The Church and Cardinal Dolan himself already made it clear that some of Obama’s policies are intolerable and that we must oppose them at all costs. I do not see the Al Smith Dinner invitation as stepping down on that position in any way, nor do I see it as an endorsement of President Obama or his policies, about which the Cardinal and several other bishops in the United States already made themselves clear — the Church is still suing the Obama over the HHS Mandate. Case in point.

The perceived evil in the case of the Al Smith Dinner invitation is an evil in itself, because of the potential scandal, or as it may be, real scandal from the confusion it caused. One question that needs to be considered, however, is whether the action itself of inviting the President, per se, is an evil act. From there, we can go on to consider other factors.

The whole matter is deeply embroiled in politics on various levels. The action not to invite the president would have been seen as political, for that reason. The decision not to hold the dinner (which would have shocked a lot of people and caused quite a stir) certainly would have created a backlash against the Church and brought about several undesired effects — effects that you and I may not be aware of but that the Cardinal might have easily foreseen. Clearly, the City of New York would not have appreciated it very much, since, after all, it is a charitable fundraiser for underprivileged children in the diocese. The Church would have been seen as hurting itself by doing that.

Incidentally, the Church or many of its institutions may be forced to make moves that would be hurtful to its own operations if the HHS Mandate is not reversed, but we are not there yet. So perhaps this was not yet the time to make a (politically perceived) statement by not holding the dinner. Sure it would have been a small loss in the grand scheme of things as far as not being able to raise as many funds through the dinner this year, but the way it would have been spun by the media, especially the local media would have been much more detrimental to the Church in the Archdiocese of NY and would have made the Cardinal a much less influential leader within his own community — something he needs to take into consideration as the pastor in his locality. 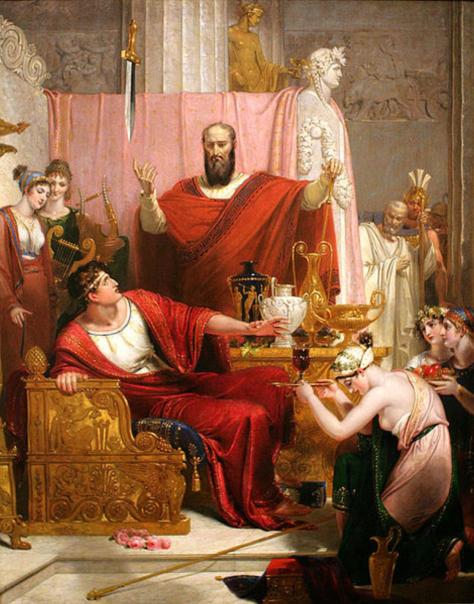 Who wouldn’t want to be king (for just a day)

Put your feet in the Cardinal’s shoes, for just a moment. Now, look up and behold the Sword of Damocles, dangling by a thread over your head. If you decide to hold the dinner, someone will get angry and cut the thread; if you decide not to hold the dinner, the same will happen; so any way you look at it, you are involved in an awkward situation. No matter what decision you make, somebody is going to get scandalized, someone is going to get the wrong idea, and the Sword of Damocles is going to fall on your head.

Okay, you can step out of those shoes now and put your house slippers back on.

Now let’s consider whether the invitation is itself an evil act. What is the dinner for? It is not an endorsement, but a charitable fundraiser, where both candidates are invited, and it aims at reminding people, in the midst of a heated campaign, of the need to be more civil and less political.

Will the candidates take advantage of it for political purposes? Of course each of them will. But that opportunity comes with a cost. How comfortable did Obama really feel being there? I don’t know, but he did not look comfortable after Romney’s speech. He looked and sounded in his speech more like he did in the first debate. Was this really a good photo-op for Obama? If it was, it was not his best one, for sure. And if you are suggesting that it was a photo-op for the Cardinal, well that’s just cynical. Maybe you should try walking around in his shoes for a day, and see how you feel about it then.

There are the factors we don’t know about, and for that matter we cannot discuss them. Maybe someone got a little talking to that evening. Maybe the olive-brach-like gesture is a way of saying, “Hey guys, at least in the Catholic Church we can still entertain some format for civil discourse, whereas none of the rest of you people seem to be doing that, anywhere. That being the case, as long as the Church is still around, maybe there’s hope for more civil discussion down the road, when you need it… Something to think about, just let us know. And by the way, when you need a friend, we’ll still be here for ya.”