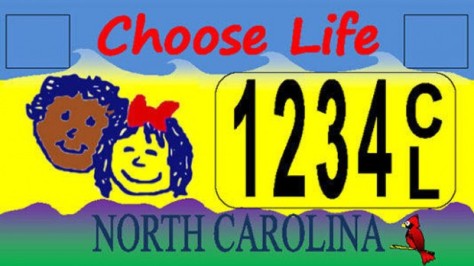 According to the judge’s reasoning, unless the state issues “Choose Death!” license plates for people who would want to advertise such things, it cannot issue plates urging people to choose life.

I suppose there is no way of getting around this being a “freedom of speech issue,” when you look at it from the perspective of “choose death people,” who certainly have a right to express their opinion in the same forum as those who prefer to choose life. However, I find it hard not to see this as a repression of free speech.

For one, the license plate does not read “Pro-Life,” but “Choose Life.” In that respect, the plate does support “choice,” does it not?

To directly counter this plate and represent the opposing voice, plates would have to read something to the effect of: “Choose Death,” or “Death to the Unborn.” Not the type of thing a state would want to sanction with it’s licence plates, obviously. So therefore, no one can promote a reasonably uplifting message?

Well then, let’s also ban environmentalist license plates. This is not something I want to advocate, but using the judge’s logic, the opposition to the EPA is not equally represented on the backs of cars. What about their voice?

We also need to do away with pet owners’ license plates, since there are other people who believe that owning animals constitutes cruelty to animals, and their voices are not being heard.

What this is, simply just is that abortionists do not what the pro-life voice to be expressed or heard in the public forum. Period. It’s a shame when the judicial system cannot see that for what it is.