The Baptism of the Lord was accompanied by one of the most stunning and remarkable events found in Sacred Scripture: The rending open of the heavens, the visible descent of the Spirit like a dove, and the Father’s audible voice.

The importance of this remarkable moment can not be underestimated. Not only was it pivotal for Jesus himself but also for the early Church, as it is found in all three of the Synoptic Gospels and was frequently commented on by the Church Fathers. Today, however, the full meaning and import of this unique moment is unclear or perhaps even lost.

Over the next few weeks I’d like to offer a primer reflecting on this event as found in the Gospel of Luke 3: 21-22, which offers powerful insights into the life of Christ and our faith in the Triune God.

“When all the people were being baptized, Jesus was baptized too. And as he was praying, heaven was opened and the Holy Spirit descended on him in bodily form like a dove. And a voice came from heaven: “You are my Son, whom I love; with you I am well pleased.”

The Spirit’s descent brought forth profound insights from the Father’s of the Church. Saint Irenaeus wrote, “Therefore did the Spirit of God descend upon Him, [the Spirit] of Him who had promised by the prophets that He would anoint Him, so that we, receiving from the abundance of His unction, might be saved.”

Novatian, as well, reflected upon this passage from Luke: “This is He who, after the manner of a dove, when our Lord was baptized, came and abode upon Him, dwelling in Christ full and entire, and not maimed in any measure or portion; but with His whole overflow copiously distributed and sent forth, so that from Him others might receive some enjoyment of His graces: the source of the entire Holy Spirit remaining in Christ, so that from Him might be drawn streams of gifts and works, while the Holy Spirit dwelt affluently in Christ.”

Two problems arise, however, which the Fathers of the Church responded to: Gnostics, twisting the text to fit their own doctrine, said Christ was only a man until divinity descended over him. Secondly, Arian said if Jesus needed anointing, he was changeable. God, however, is not changeable. Jesus, then, is subordinate to God, not one in being with the Father. 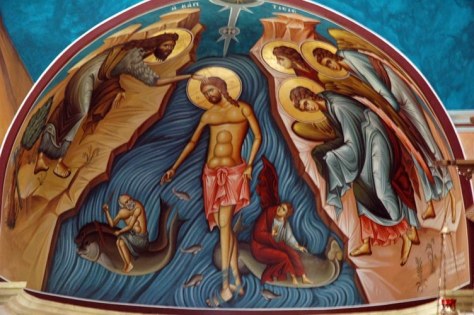 How where these two problems answered?

First, divinity did not adopt Jesus. He possessed and was anointed by the Holy Spirit from the moment of his conception. His manhood, however, was still real. It was not faked, nor a mirage, nor a garment he wore. It needed strength—the cross and suffering was ahead—to accomplish our redemption. The anointing in the Jordan is for his public mission about to begin, it did not change his divine nature.

St. Irenaeus states that this was not the moment that Christ descended upon Jesus, but, “the Word of God, who is the Saviour of all, and ruler of heaven and earth is Jesus, who took upon himself flesh and was anointed by the Spirit of the Father,” adding, “the Spirit anointed him to preach the Gospel to the lowly.” 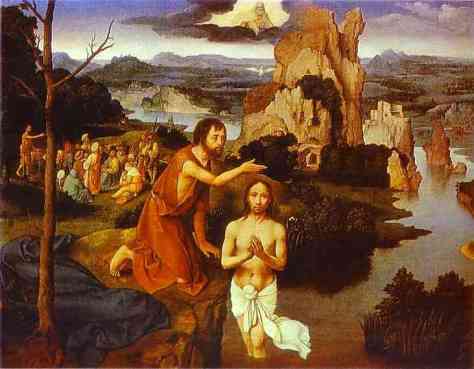 Second, the Fathers find in Christ’s anointing a public revelation of the Trinity:

“For in the name of Christ is implied: He that anoints, He that is anointed, and the unction itself with which He is anointed. It is the Father who anoints, but the Son who is anointed by the Spirit, who is the unction, as the Word declares by Isaiah, “The Spirit of the Lord is upon me, because He has anointed me.”

In this way, Ireneaus points out both the anointing Father, the anointed Son, and the unction, which is the Spirit.

St Basil also insists on this moment as a revelation of the Trinity: “For the naming of Christ is the confession of the whole, showing forth as it does the God who gave, the Son who received, and the Spirit who is the unction.”