The type of throne that a particular king possess reflects the type of kingship – benevolent or violent, aloof or compassionate – he strives to live out.

Our King, Jesus Christ, the eternal King of life, history, and the entire universe, has a throne that is absolutely one-of-a-kind. No other king in all of human history has chosen such a throne.

What is this throne?

We all know the answer. It presides over every Catholic Church and every Catholic household. It is the sign by which we are welcomed into God’s family and made citizens of the everlasting Kingdom. It has been the mark of every Christian since the age of the catacombs. Christ’s throne is the cross.

This throne is different from, and superior to, every other throne in three ways.

Those who have seen the film, The Passion of the Christ, will remember the heart-wrenching scene of the crucifixion. In that scene, after Jesus reached the top of the hill of Calvary, he let the cross, which he had been carrying, fall to the ground. Then he falls to the ground, exhausted from his sleepless night, his trials, his scourging, and his long, agonizing walk carrying the cross. He is so weak that he has to crawl over to the cross as it lays beside him. Barely able to lift himself up, he collapses on top of it, flat on his back, and the soldiers begin the process of nailing his hands and feet to the wood. And so, even when he is lifted up on the cross to die, he is still, in a real sense, lying down, helpless and weak, on his throne. He is not asserting himself, he is surrendering himself; he is not lording it over his subjects, but giving himself to them. As he explained in John 15:13: “No one has greater love than this, to lay down one’s life for one’s friends.”

Contrast this with almost any other famous throne throughout human history. The Emperor Charlemagne’s throne, for example, which you can still visit in the German city of Aachen, is a fairly simple marble throne. But it is positioned on the last of seven massive marble stairs. When petitioners approached Charlemagne, their heads would be even with his feet as he sat down comfortably and impressively, arrayed like a god. 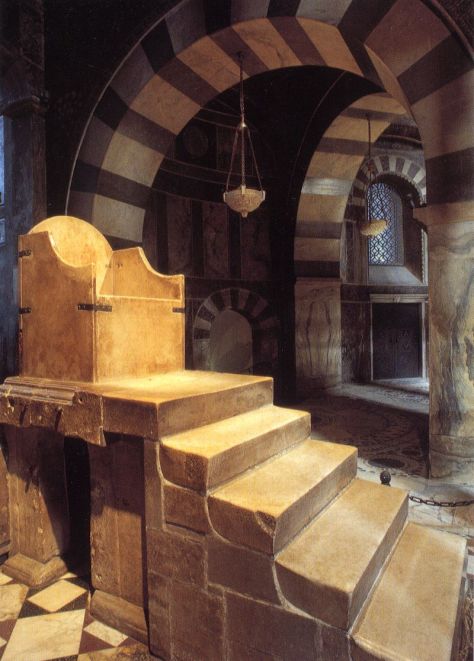 In the case of earthly kings, the throne always symbolizes earthly power. And yet, earthly kings and kingdoms always pass away, while Christ’s Kingdom continues to grow and spread, and will continue doing so forever. Our Lord’s kingdom is not about the passing power of politics; it’s about the everlasting, redeeming power of divine love. As he explained in today’s Gospel passage: “My kingdom is not of this world.” The position of his throne proves his point.

The second shocking characteristic of our King’s throne is its material. The cross is rough, plain wood.  Its only decoration is the blood of the king who gave up his life for the salvation of his people.

Compare that with the famous Peacock Throne of India’s Mughal Empire, built back in the 1600s.

This too is one of the world’s most famous thrones, though it was captured and eventually dismantled when the Mughal Empire was conquered by Iranian invaders in the 1700s. The Peacock throne was ascended by steps made out of pure silver. It stood on four solid gold feet and was surrounded by a golden canopy. The actual seat was adorned with an abundance of the softest pillows covered in velvet and silk. Behind the seat was a rich screen decorated by representations of two open peacock’s tails. These were gilded with gold, enameled, and inset with diamonds, rubies, pearls, emeralds, and every other kind of precious stone. When you approached the emperor who sat in that throne, you were blinded by the splendor and dazzled by the sumptuous beauty. It was meant to be like a glimpse of heaven.

Yet, the Mughal Empire is gone; the Peacock Throne has disappeared; those kings no longer dazzle.

But the plain, rough, blood-stained wood of the crucifix remains, in every Catholic Church and every Catholic home. And when we approach this king on this throne, our eyes our opened instead of being blinded. We see before us, clearly, the true price of our salvation, the true effects of our sins, and the unlimited mercy and love of our everlasting Emperor. And when we approach this king on this throne, we are not dazzled by diamonds and pearls, but by the patience, forgiveness, courage, and humility of Jesus Christ, our King, our God, and our Brother. Those virtues were riches that Jesus possessed in abundance; they are the riches that he wants to give us as the inheritance of grace; they are the only riches that will last forever.

The material of Christ’s throne reiterates what Jesus told Pontius Pilate: “I came… to testify to the truth.”

The third truly unique characteristic of our King’s throne is its location.

Jesus has chosen to administer his grace and redemption from the cross. And the cross is an instrument and symbol of suffering. And suffering is a universal reality; every human being who journeys through this fallen world experiences suffering. And so, this throne is so close to us, so near to us, that we actually share it; our lives, because they are marked by suffering, are always touching this throne.

Contrast that with perhaps the most famous human throne of all time: the Dragon Throne of the ancient emperors of China.

What made this throne so impressive was, precisely, its location. It was located at the very center of the Forbidden City, which was completely off limits for everyone except the most illustrious and powerful subjects of the emperor. Some of those subjects were kings themselves, kings who paid tribute to the emperor. And when these vassal kings came for an audience with their emperor, they had to be escorted through a dizzying maze of gateways, bridges, doorways, and hallways in order to come to the Dragon Throne. And once they arrived, before they were allowed to speak, they had to kneel and press their forehead to the floor three times, then kneel and do the same again, and then a third time. Only then, after this long, intimidating, and humiliating ceremonial was the vassal permitted to speak to the emperor. Everything about the Dragon Throne and its rituals was designed to emphasize the vast moral distance between the emperor and even his most distinguished subjects.

But now, today, the Dragon Throne is empty; its emperor is gone.

And our king, our emperor, who longed to be close to even the humblest, most miserable person, and so purposely enthroned himself on a sign of suffering, is still reigning.

Of these three unique characteristics of Christ’s throne, its low position, its poor material, and its nearby location, perhaps the last is the most important.

Jesus, by sharing in our suffering, actually allows us to share in his kingship, to join him on his throne, if only we unite our sufferings to his, if only we place our crosses on the altar with his. In Christ, we are not only subjects and followers of the King, but fellow rulers with the King. Every Christian is a royal son or daughter of the everlasting Lord, called and equipped by our share in the cross to conquer evil and expand the rule of mercy, justice, and the Kingdom of God.

This is what the Church wants to remind us of today: to know, love, and follow Jesus Christ is the only path to fullness of life and meaning.

Only through him, with him, and in him can we become what we were created to be, what in the depths of our hearts we long to be.

Today, let’s renew our gratitude and confidence in this King whose throne is the cross and ask him to fill us with the grace we need never to be intimidated by earthly power, never to be seduced by earthly riches, and, most importantly, never to be discouraged by the weight of our glorious crosses.