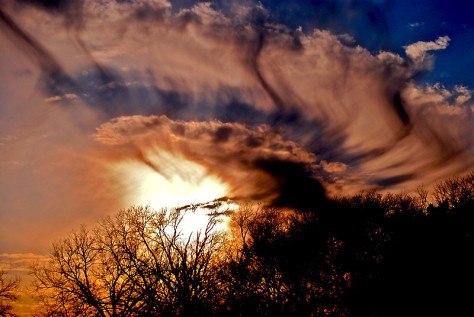 O Adonai, and leader of the House of Israel, who appeared to Moses in the fire of the burning bush and gave him the law on Sinai: Come and redeem us with an outstretched arm.

When the Lord appeared to Moses in the burning bush, he revealed himself as “I AM,” in Hebrew, YHWH. Then he added:

To the Hebrews, the holy name of God was too sacred to pronounce. They would not even utter God’s revealed name when they read the Scriptures aloud. Wherever the holy name YHWH appeared in the sacred text, scribes wrote above it the word, ADONAI, meaning Lord in Hebrew.

Thus, the significance of Adonai in today’s O Antiphon:

The Great I Am — ADONAI — the Lord is the leader of the house of Israel; the very one who appeared to Moses in the burning bush and gave them the law on Mount Sinai; and the one of whom Isaiah prophesied:

In this icon Jesus Christ is present in the womb of the Blessed Virgin Mary, before Moses in the burning bush to signify that Christ, the Incarnate Lord, is the one who comes to save the House of Israel

Today’s antiphon harkens to the covenant between YHWH and his chosen people, when the Lord entrusted the Law for his people Israel to Moses on Mount Sinai.  Jesus Christ, the one true God, our Lord, and the One Mediator between God and man, gave us a new covenant.

The Virgin Mary, to whom the angel revealed God’s word at the Incarnation, is for us the Arc of the Covenant, for she bore in her womb the Lord of the universe, who gave us a new law, not written in tablets of stone, but on our hearts.

Mother of the Word Incarnate, Arc of the Covenant, pray for us!

Here is today’s O Antiphon, “O Adonai,” as it is sung for the Liturgy of the Hours in Gregorian Chant: