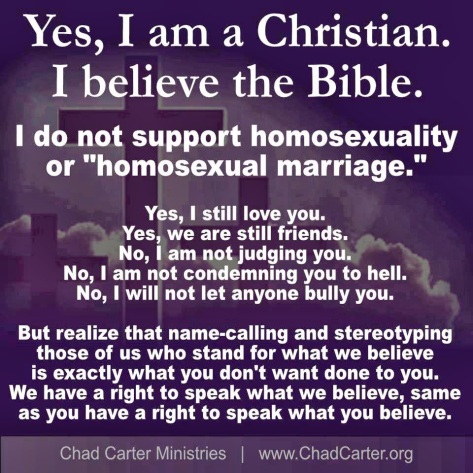 If I were invited to a gay wedding, I would have to decline the invitation.

I know a lot of people will take issue with me for that, say I hate gays (which isn’t true), call me a narrow-minded bigot or something worse. That’s all sticks and stones… I’m just glad I’m not a photographer, wedding cake baker, or a florist.

Yesterday, Arizona Governor Jan Brewer vetoed legislation that would recognize people’s rights do deny services to others in areas where they believe it would infringe upon their religious liberty. You can read the proposed legislation here. It never mentions the word gay or homosexuality once. In this video, Gov. Brewer explains her decision to veto the bill.

On Fox News, Megan Kelly and Britt Hume expressed the same concerns about the proposed law (video), before the governor issued her veto. Megan Kelly observed:

“I look at this bill and I wonder whether this is a reaction, an overreaction, to people who feel under attack on this score, and in the end, they may have struck back in a way that’s deeply offensive to many and potentially dangerous to folks who are gay and lesbians and need medical services and other services being denied potentially.”

To which Hume answered, “Right.”

It is hard for me to fathom a doctor refusing medical treatment for this reason. If the law were to permit this, then I would have to say, they are right; it’s wrong. Still, I think it’s wrong for a professional photographer to be sued for not taking pictures at a gay wedding.

There is a difference, you know? And I have to wonder, how one might articulate that difference in legislative terms. I believe this is what the Arizona Religious Freedom Bill sought to express. Evidently, it failed to do so.

It is as though Gov. Brewer and others are saying, “We do respect your religious freedom, which is recognized by the Constitution of the United States. But you cannot exercise that freedom when you appear to be discriminating against others, simply by not participating in the types of activities that conflict with your religious values, but only if it involves a business contract.”

It would be wrong for a restaurant not to serve a gay or lesbian person or couple, in my opinion, even if the individual or couple could simply take their business somewhere else. Does that mean that a photographer should be compelled to attend a gay wedding on the same grounds? I don’t think it does. If you think it does, please tell me why it does.

Here’s why I think these are different scenarios, which the law can’t seem to articulate.

In the case of a couple eating at restaurant, their being gay isn’t an issue related to their eating food or being served. In the case of a wedding, not only does it have everything to do with their being gay (because of the nature of the wedding), providing a service at their wedding entails a participation in a ceremony that some people would not ordinarily attend based on their religious convictions. Why should they be compelled to do so by law for any reason?

I think conscientious objection ought to be respected and protected in this case.