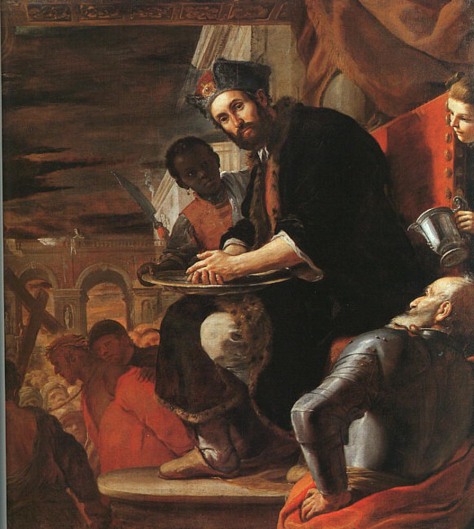 Am I my brother’s keeper?

When I give tours at the Metropolitan Art Museum in New York, I like to stop by this paining and not say a word. Eventually, someone asks, “What’s this painting about?”

Most people do not see what’s going at first or even second glance. Surprisingly, some people never see it until you tell them the title of the painting, and even then, some still don’t see what is going on.

Jesus is pushed to the background, almost invisible. His red garment bleeds into the scenery, as his faded profile is escorted out of the picture. The focus isn’t on Him, but on Pilate, washing his hands (the title of the painting, by Mattia Preti). All eyes — our eyes, the eyes of the crowd, and even the eyes of the servant boy — are on him.

Pilate looks toward us, not to the crowd, as if he is begging for our justification. We catch him in the act of washing his own hands. This is a remarkably feeble gesture, an attempt at justifying himself, and it isn’t working. There’s an overbearing sense of condemnation lingering over this portrait. And it’s glaring — at you!

The irony of this snapshot consists in what is barely seen. Jesus Christ is the just man condemned to death. It is a rare scene in art for Jesus not to be the focal point of a painting where he is depicted (I can think of Rembrandt’s Storm on the Sea of Galilee, where Jesus sleeps on the boat, as another example). And still, the central figure of this painting would not even be recognized for who he is if Jesus were not there. In a way the artist does not want us to know this is Pilate at first, because he wants us to reflect — in more than one sense of the term.

The painting reflects, like a mirror, back on the viewer, converting us into the focal point, rather than Pilate. This is a call to see ourselves for who we are and to ask ourselves, have we washed our hands of this crime too?

And is it working? 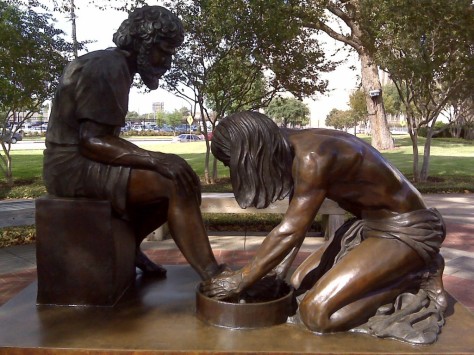 Unless I wash your feet, you can have no part of me

In contrast, we turn to another scene to find Jesus assuming the humble position of a servant washing his disciples’ feet. Again, the Lord does not condemn. And again, he is rejected.

Peter cannot tolerate this gesture. He’d rather wash his own feet than watch Jesus on his knees, stripped down to his waist, taking on the work of a slave. Humility just isn’t on his agenda. He won’t have it for himself, nor will he have it from God. Fortunately, Jesus is able to persuade him. And then, after admonishing his disciples to imitate him and wash each other’s feet, this humble gesture is quickly forgotten.

This may just be the most forgotten of all passages in the Gospel. I find that odd. Jesus says, “Unless you are born again…” and “Unless you eat my flesh and drink my blood,” and “Do this in memory of me” and we take those things seriously. This passage has the same signals and queues that those other passages have and yet we don’t respond in the same way. Could it be, because like Peter, humility is not on our agenda?

There’s something in our fallen nature that doesn’t love humility. Something in us wants us to justify ourselves. We’d rather wash our own hands than let God wash us.

We would rather defy the judgment of our own conscience than embrace humility.

Still, Christ does not leave the picture. He is still there as a forgotten sign inviting us to add a little humility to our agenda.