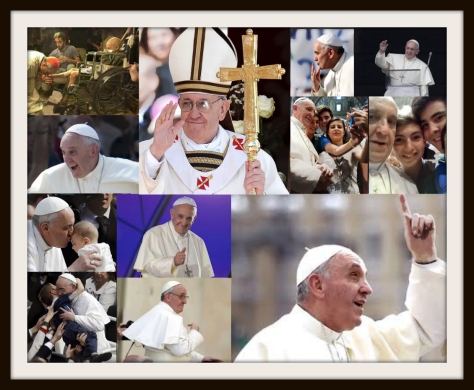 Thank you for teaching us the importance of Gospel Joy with your words and your actions!

The following statement from the USCCB summarizes the first year of his pontificate and expresses our heartfelt gratitude nicely.

STATEMENT OF THE USCCB ADMINISTRATIVE COMMITTEE  ON THE ANNIVERSARY OF THE ELECTION OF POPE FRANCIS (USCCB.org)

In his first year in office, Pope Francis has consistently called upon Catholics to look again at the fundamental values of the Gospel. He has encouraged us to be a Church of the poor and for the poor, reaching out to the marginalized and being present to those on the periphery of society. He has set an example bychoosing a personal simplicity of life, by washing the feet of prisoners, and by taking into his hands and kissing the badly disfigured. His Holiness has also set in motion a process that will lead to the reshaping of the Roman Curia in a way that will enhance the effectiveness of his ministry and better serve the needs of the Church in our present day.

In this way the Holy Father has brought to light new dimensions of the Petrine Ministry and added new life to the office he holds. His constant outreach to the alienated, his emphasis on mercy and his sheer humanity have served as an inspiration not only to Catholics but also to other Christians and people of good will around the globe. On this first anniversary of his election, the Administrative Committee invites the prayers of all the faithful that Christ our Lord will bless Pope Francis and grant him many years of fruitful ministry as Bishop of Rome, as the Servant of the Servants of God.