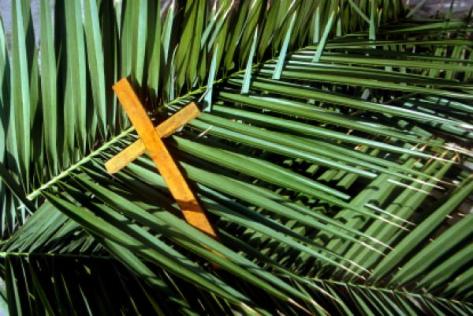 Say to daughter Zion, “Behold, your king comes to you, meek and riding on an ass, and on a colt, the foal of a beast of burden.”

There are at least 2 contradictions in the readings for Palm Sunday. The first is blatant, the second gets overlooked.

First, we have 2 Gospel readings today and in both of them, we identify with the crowds more so that in any other reading of the year. We begin by imitating the Jews in Jerusalem by processing into the church with palm branches while singing “Hosanna!” just like the crowds did when Jesus made his “Triumphant” entry into the city. Second, during the reading of the passion, we cry for Jesus to be crucified, just like those same crowds in Jerusalem.

I believe the Church is trying to make a point here. Who’s the real sign of contradiction? Jesus, the crowds in Jerusalem, or us?

The second contradiction in the Gospel today has to do with Jesus’ “Triumphant” entry into Jerusalem on a donkey. I’d like to know, why don’t we identify with the donkey more? Perhaps we should.

Who plays the donkey?

Kings don’t make triumphant processions on donkey colts! They ride stallions or get chauffeured in chariots. Why the donkey?

The donkey — because Jesus’s entry into Jerusalem is a humble entry. He does not announce his coming, he just trots in on a pair of domestic donkeys, and all pandemonium breaks loose. The donkey’s got to be thinking, “What are these people so excited about? I’m just a donkey…”

(Incidentally, Matthew’s Gospel has Jesus riding on 2 donkeys of different sizes (as prophesied). Though I have a hard time envisioning that, there’s a good reason to pay attention to donkey #2. I’ll get to that later…)

Have you ever tried to view this scene through the donkey’s eyes? Or hear it with his big ol’ donkey ears? Palm and olive branches, cloaks of different colors strewn all over the place, debris flying in the air, shouts and cheers… This was the biggest day of that donkey’s life! After that, he just went back to being a humble donkey.

The lesson for today is so easily missed. It’s about humility. The donkey is there to remind us of that.

Maybe we aren’t meant to be that donkey (even if we wanted to), but there are ways in which we can identify with him.

We can contemplate today’s liturgy from numerous angles: the praise and worship we owe Jesus our King; our fickle human nature that rebels against him sometimes; his dying for our sins committed against him; and, let’s not forget… what we have to offer the Lord.

There are many things God asks of us, many gifts he’s given us, which from time to time he wants us to use to serve him. In return, he gives us a share in his glory. If we are willing to participate in his trials, we can share in his triumph too. His glory also becomes our glory.

When you consider Christ’s humble entry into Jerusalem today, consider that humble donkey. Give him a pat on the back. And don’t forget to thank the other donkey!

(Yep, there’s another little guy in this Gospel. Who could that be? That one deserves some attention too, probably…)