Upon coming into contact with so many cases of broken and dysfunctional families, the high percentage of divorce, child abuse, the fear of commitment you can’t help but ask: Where is the love?

John Paul II in his first Encyclical, Redemptor Hominis, insists on the fact that:

Man cannot live without love. He remains a being that is incomprehensible for himself, his life is senseless, if love is not revealed to him, if he does not encounter love, if he does not experience it and make it his own, if he does not participate intimately in it. (n. 10) 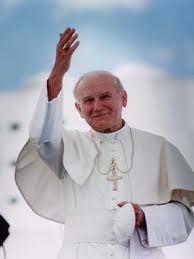 This text reflects something he wrote many years before he became Pope, when he was teaching Ethics at the University of Lublin. He gave a course on Love which was later published as Love and Responsibility. In it he firmly states that:

Love is the fullest realization of the possibilities inherent in man. The potential in the person is most fully actualized through love. The person finds in love the greatest possible fullness of being, of objective existence. Love is an activity, a deed which develops the existence of the person to the fullest. It must of course be genuine love. What does this mean? A genuine love is one in which the true essence of love is realized –a love which is directed to a genuine (not merely apparent) good in the true way, or in other words the way appropriate to the nature of that good.

Both of these texts express how fundamental love is to the human person. Love, therefore, cannot be taken lightly. The human person cannot be content with any form of love. True love must be sought.

As Catholics, we know that the highest form of love is to love God, but Scripture reminds us that we cannot possibly love God whom we do not see, if we don’t love our neighbor whom we do see (cf. 1 Jn 4:20).

The love proper to members of a family is based on the closeness that comes from the fact of being related, while the love proper to friendship is based on common ideals. Love proper to matrimony, and therefore the true meaning of the sexual act, is first of all based on the complementarity of sexes (male-female). That is, matrimony in its most essential meaning has to be between a man and a woman. Only this can be called marriage. To call anything else marriage is to empty the word of its meaning.

The effort to achieve “marriage” status for same-sex couples is undermining the institution that is most essential for a healthy and virtuous society, matrimony. It is giving a major blow to the concept of true love. Those who take this stance do not take into account that one of the partners believes to be complementary whether through a physiological imbalance (excessive production of the hormones that are found in greater quantities in the other sex) or a psychological lacuna (not having the proper psychological development that comes from the relationship to their father or mother). Therefore, whether they acknowledge it or not, the defense of same sex “union” (I insist it cannot be called marriage) is based on a disorder. It is not based on true love.

The effort to neutralize the meaning of matrimony is an abuse of language, necessary to purport what in itself has no foundation. This effort reflects what the American Philosopher, Richard Rorty, seems to express in his work, Contingency, Irony,and Solidarity, that truth depends on language, language on freedom, therefore truth depends on freedom. If this is not arbitrariness, then what is?

Obviously even though it is fundamental, the complementarity man-woman doesn’t guarantee that there will be true love. It is necessary for married couples to seek love as a reciprocal giving of self. With a profound awareness of the demands and obligations of married love which will be at the basis of a healthy family.

In any of the ways of loving mentioned, the highest and truest form of love will consist in self-giving. The Vatican II Constitution Gaudium et Spes reminds us:

Indeed, the Lord Jesus, when He prayed to the Father, ‘that all may be one…as we are one’ (Jn 17:21-22) opened up vistas closed to human reason, for He implied a certain likeness between the union of the divine Persons, and the unity of God’s sons in truth and charity. This likeness reveals that man, who is the only creature on earth which God willed for itself, cannot fully find himself except through a sincere gift of himself (n. 24).

Tomorrow, in part two of this article, we will take into account the teaching of the philosopher Karol Wojtyla (John Paul II) regarding the essence of love.