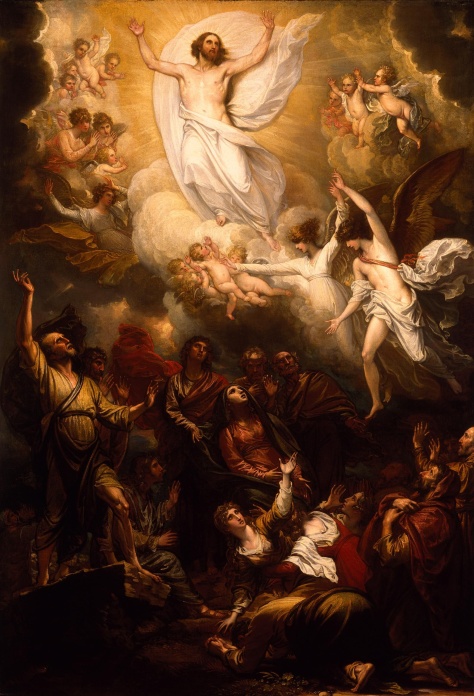 The Ascension by Benjamin West

The Liturgy on the feast of the Ascension  presents us with the apostles staring awestruck at the sky as Jesus ascends out of sight; so much so, that we get the impression that they would have remained for days in this stupor, had not two messengers been sent to shake them up.

This is what the Ascension does: It pulls our gaze upwards to what is eternal, to where Christ has gone, to heaven, our final destination and home.

The Ascension reminds us that we should think of Heaven much more than we do since it is ultimately the reason for everything that we do.

But Christ’s Ascension is much more than just a nice reminder of Heaven. St Thomas Aquinas, in part three, article six of the Summa writes that while Christ’s Passion and Death removed the hindrance of sin from us, his Ascension is also a direct cause of our salvation, pulling us in it’s wake, so to speak, towards the rooms of the mansion that he has gone to prepare for us, “for where I am there also will you be.”

The Catechism (number 666) expresses this point clearly, “Jesus Christ, the Head of the Church, precedes us into the Father’s kingdom, so that we, the members of his Body, may live in hope of one day being with him forever.”

This hope of being united with Christ forever has been a constant source of strength for many people over the ages; let’s take two brief examples from the first Christians.

St. Paul, amid his rigorous travels, preaching, and imprisonment found hope in Christ’s surpassing power, for in virtue of his Ascension to the heavens everything is under his feet; he is the Lord and master of all things.

St. Stephen, the first of a vast procession of glorious martyrs for the Lord, found hope during his last moments by turning his gaze upwards, crying out: “Look! I see an opening in the sky and the Son of Man standing at God’s right hand!”

While their feet were firmly planted on ground these two early followers drew strength from Christ, ascended to Heaven. Saint Leo the Great writes, “The Blessed Apostles made such progress through the Ascension that they now found joy in what had terrified them before.” Perhaps this is because they understood that just as he did not abandon his Father when he came to earth, neither has did abandoned them when he ascended to heaven.

Christmas drives home the humanity of Christ; Good Friday, his suffering and redemption for our sake; Easter his Resurrection, and the Ascension his divinity as he sits at the right hand of his Father in the glory of heaven.