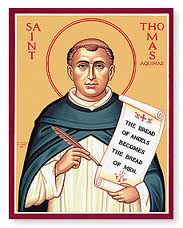 I woke up this morning, realizing that today is the feast of St Thomas Aquinas, inspired to write a brief panegyric to the great saint and place this blog under his patronage.

Aquinas is best known for his monumental treatise, The Summa Theologiae. The Summa — one of his later works, completed by his companion and biographer, Reginald of Piperno, after his untimely death — was originally commissioned by Pope Urban IV, as a “studium” (students’ manual) for theology students. In 1323, less than fifty years after his death, it was cited in the cause for his canonization. As one of the cardinals in the canonization process noted: “Tot miraculis, quot articles” (there are as many miracles [in his life] as articles [in his Summa]), viz., thousands (see Wikipedia article).

Regarding his own work, near the end of his life, Thomas famously told Reginald: “All that I have written seems like straw to me” (mihi videtur ut palea).

Thomas was not only a great theologian, philosopher, and top class logician; he was also a man of deep religious conviction and faith. Of his greatest contributions to the Church, one cannot overlook his magnificent Eucharistic hymns, e.g., the Adoro devote, Pange lingua, and Lauda Sion, which he was commissioned to write for the liturgy of the feast of Corpus Christi. Here’s my favorite verse from the Tantum Ergo (attributed to Aquinas):

Translation: Therefore, to so great a Sacrament, let us venerate by falling prostrate! And let the Old Law give way to the New Rite. Let faith supply assistance to our deficient senses.

Here’s a video compilation of the hymn, with the Latin text and translation into English:

Finally, one cannot go without mentioning Thomas’s sharp critical mind. In this regard, one of my favorite quotes from Aquinas is from his Commentary on Aristotle’s De coelo:

The fact that these phenomena can be explained in this way is no proof of the theory’s truth; for the same phenomena might be better explained in a wholly different way as yet unknown to men. (In de coelo et mundo II, 17, 451)

The fact that he issued this statement while commenting on a text that espoused a geocentric vision of the universe testifies to the fact that the great thinker’s mind was way ahead of its time. Yet few take note of his outside-the-box way of thinking when criticizing his “medivalistic views.”

I’d like to end with the saint’s own words, the Prayer of St Thomas Aquinas:

Grant me, O Lord my God,
a mind to know you,
a heart to seek you,
wisdom to find you,
conduct pleasing to you,
faithful perseverance in waiting for you,
and a hope of finally embracing you. 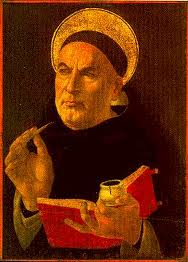 St Thomas Aquinas, Pray for Us!