Today in the city of Rome, 43 Archbishops, including 2 cardinals, received the pallium from Pope Benedict XVI during a ceremony at Saint Peter’s Basilica. Two other prelates, who were absent will receive the their palliums in their own dioceses.

Among the recipients the following were from dioceses in North America:

This brief video from Rome Reports highlights the ceremony:

The Tradition of the Pallium 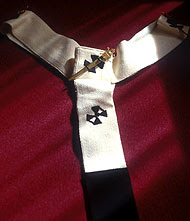 The pallium is a Y-shaped liturgical vestment worn around the collar by Metropolitan Archbishops only during special liturgical celebrations.

The word “pallium” means a “covering” in Latin, because the pallium is worn over the other vestments and it covers the shoulders. The equivalent vestment in Eastern Orthodox churches is called the omophor, from omos (shoulder) and pherein (to bear). This Greek title indicates the role of the Metropolitan, who as a bishop is a shepherd of his local flock. The word omophor, then, hearkens the significance of Christ, the Good Shepherd, bearing the lost sheep on his shoulders.

The allusion to the Good Shepherd is deeply rooted in the pallium’s tradition. The palliums worn by Metropolitan Archbishops are made of pure white wool from two very special lambs.

After the blessing ceremony at the Lateran Basilica, the lambs are brought to the apostolic palace at the Vatican for the Pope to bless them.

Afterward, the lambs are delivered to the Benedictine Nuns at the Basilica of St Cecilia in Trastevere, Rome, to be tenderly loved and cared for in the basilica garden over the next few months. A week before Easter, the lambs are shorn, so that their wool may be used for the weaving of the pallia. Every pallium contains some strands of wool from these two brave young lambs.

Once the pallia are sewn, they are placed in a silver casket, which is reserved in the Confessio — a special place beneath the altar of St Peter’s Basilica where St Peter’s bones are laid to rest (contrary to some accounts that I’ve been told, the pallia do not actually touch the bones of St Peter). Due to their proximity to the Saint’s bones, the pallia become first class relics.

On the Solemnity of Saints Peter and Paul — that is today — the Holy Father places a pallium on the shoulders each new Metropolitan Archbishop during a ceremony at the Vatican.

The Significance of the Pallium

The pallium, made of pure white wool, represents the Lamb of God who shed his blood for our sins. It’s being reserved in the tomb of St. Peter and conferred by the Pope, stresses the significance of the unity of the Church, especially regarding that among the bishops of the Church with the Bishop of Rome: primum inter pares — first among equals. The pallium’s Y-shaped form, can be understood to signify a yoke: For my yoke is easy and my burden light (Matt 11:30). There are 5 black crosses embedded on the pallium (red crosses on the Pope’s pallium) signifying the 5 wounds of Christ. Three of the crosses have three pins inserted in them to remind the bearer of the nails driven into our Lord’s hands and feet. Finally, the tip of the pallium is embroidered in black, like the lamb’s feet. For Christ the good shepherd laid down his life for his sheep that they may walk the path of life.