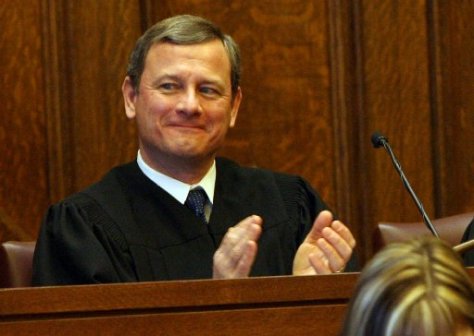 It goes without saying, however, that today’s Supreme Court decision, as shocking as it might have been for most of us, has monumental historical significance and enormous political implications. One of those implications is that you cannot accuse the Chief Justice of being partisan in this case and maybe, just maybe, that’s a good thing. But I’m not going to comment on that.

When the Twitter-Sphere began issuing boggled clutter and contradictory reports on the decision between 10:10 and 10:20 a.m. this morning, I began to think, “It’s all over but the cryin’.”

When I learned that Roberts had sided with the “liberal” majority (well, they are), I was… like… “Huh?” But I could not go so far as to retweet bitter outbursts calling him a traitor and worse things, by far. I then started to think that perhaps we need to consider what motives people have for calling him a traitor.

If we (they) (whoever) are calling Robert’s a traitor, could it be because he did not side with his “conservative” colleagues on the bench? If so, I should hope that more justices would vote the way he did, that is, on principle, rather than according to party lines.

Please don’t get outraged at me yet. I’m just saying: “If… then…” I’m not saying I agree with his decision at all, or that I even understand it. The only objective criterion I have for judging Robert’s decision, whether I agree with it or not, at this point, is his own statement: “It is not our job to protect the people from the consequences of their political choices.”

Make of that what you will.

I’m sure there are more politically enlightened perspectives on how a Supreme Court Justice ought to judge — I’m not a political science major or a lawyer. But as a citizen who thinks he understands civics and the rights, duties, and powers of the separate branches of our government, I’m feel compelled to question the obvious nature of the outrage against the court. Getting mad at them won’t do anyone any good (and perhaps that could be the point to Robert’s statement concerning our “political choices”).

What were people’s expectations and why did they hold those expectations of a Supreme Court Justice in the first place?

Of course I know the answer to the first part of the question. We might have expected Kennedy to dis us, but Roberts?

There’s another way of looking at this (read here, if you are interested). And I think that in time, in short time maybe, when the initial shock subsides, people will begin to see this awkward looking move from the Chief Justice quite differently. Even if they don’t look at it differently, they may now be motivated to vote differently, better said more proactively, in the future.

Okay, I said I was not going to get too political (how did I do?). I also said I held back from saying “It’s all over but the cryin’,” because it’s not over. I decided to fall back on Yogi Berra again, to quote: “It ain’t over till it’s over!” That is the important thing to keep in mind, I think.

The Catholic Bishops in this country, have asked us to step up to the plate and become actively involved in the political process for the sake of defending and preserving our freedom of conscience as it is being threatened within the public sector. The way today’s Supreme Court decision was framed did not put an end to the discussion; rather, it returned it to the political sphere, where it actually belongs.

Furthermore, the temporary survival of the Affordable Care Act’s Individual Mandate isn’t exactly the sounding of the death knell either. Had it been ruled unconstitutional, it would have caused a the Obama administration a temporary setback, a black eye that would have healed before the November election, anyway (maybe that’s what some people were really hoping for). It would not have necessarily done away with the HHS Mandate, which is a more direct threat to our religious freedom in this country. The court cases against that mandate were only recently issued. These are separate law suits that will be dealt with in due time.

Of course, the separate issue of the HHS mandate does not diminish the weight of the Individual Mandate, which still stands, for the time being. Apparently, we are just going to have to treat them as separate issues, which they are. A court ruling striking down the HHS Mandate separately will set a remarkable precedent regarding the tradition of religious freedom in this country.

As for Robert’s “flip-flopping,” as many are now calling it, on the Individual Mandate case, I kind of see it, ironically, like a sort of veto from the Chief Justice. It is as if he were saying, “This is not our problem to fix. You fix it.”

In the end, if there’s a biltrix for today, it is hard to get around being political. In the end, we are not looking at the end. So don’t get mad; don’t even get even; because now we have another opportunity to get it right. If that is the case, then perhaps we ought to be thanking Justice Roberts. I hope it is the case.