In 1996, Pope Benedict (then CDC prefect, Josef Cardinal Ratzinger) delivered an address to the Conference of Central American Bishops entitled, “Relativism: The Central Problem for the Faith Today” — a 10 page document I managed to summarize in 15 pages. I don’t intend another summary here.

The discourse’s title says it all: We’ve got a problem with the faith today, a central problem with a capital P — that doesn’t stand for Pool — and name of the problem is Relativism. To this effect, Ratzinger, while holding his finger on post-modern religion’s waning pulse, observed that:

“If we consider the present cultural situation, about which I have tried to give some indications, frankly it must seem to be a miracle that there is still Christian faith despite everything… Why, in brief, does the faith still have a chance?”

That’s the question the man who 10 years later would become Pope asked back in 1996. Before going on to consider his answer, let’s take a look at some of the findings in the Pew Research Center’s recent report on religion and public life: “The ‘Nones’ Are on the Rise.”

Decline of Protestant Christians vs. Rise of Unaffiliateds in the U.S.

According to this graph, the number of those who consider themselves to be Catholic has maintained a relative status quo, since the early 70s. The number of those claiming to be Protestant, indicated by the red line, starts to precipitate downward around the middle of the timeline — that corresponds roughly to the early to mid-90’s (let’s say, 1996-ish). At around the same time, the number of “Nones” or unaffiliated (atheists, agnostics, or “nothing in particular”)  begins a dramatic climb. This chart represents the trends as of 2010.

Where do we stand today?

According to the report, the Protestant population in America has decreased to 48% in 2012. This marks the first time in our nation’s history that the percentage of Protestant Christians has dropped below 50%.

Meanwhile, the unaffiliateds have reached a new benchmark of 20% — that’s a 5% increase in just 5 years.

The implications of this religions restructuring of America become significant once we consider the attendant statistics: 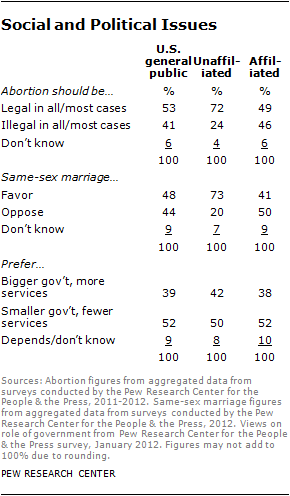 Many will argue that the religiously unaffiliated can still be a moral person. I do not doubt that that is possible, but the question still needs to be asked, whose morality?

A religiously affiliated person should at least know what the moral expectations of his professed religion are. Whether that person agrees with or chooses to live by those expectations is another question.

The person who does not assent to a particular creed, on the other hand, is less likely to recognize any one moral code as given. He will likely say that it’s sufficient to obey the positive law of the state to the extent that the law in question happens to be reasonable. Beyond that, if my behavior does not harm anyone (besides me), it’s not anyone else’s business; it is a matter for me to decide; it boils down to what I think is reasonable.

Again, the question needs to be asked, whose reasonableness? Whose rationality?

You see, a pluralistic society like ours hinges on there being a diversity of opinions and points of view. All things being equal — including all religious beliefs and the lack thereof — each man must ultimately decide for himself, based on his criteria, his values, his rationality. The beauty of keeping religious affiliation at bay, for many people, is that while they are willing to let you practice your beliefs in private, you must leave them to practice theirs.

Ultimately, it is a security blanket for solipsism.

Solipsism: solus-ipse-ism, “just-the-self-ish-ness,” in Latin. Relativism ultimately reduces to a solipsistic state in which I permit myself to hold only what I can determine to be reasonable for myself. I cannot say what is good, right, or just for everyone (neither can you or anyone else for that matter); I won’t make claims or hold to any claims made in that regard; I therefore cannot accept for myself mandates issued from any authority that proceeds from anywhere beyond the strict confines of my own head. In order for this to hold, however, I need you to stay in your place, so that I can feel safe and comfortable in mine.

Religion, by its nature is immanently incompatible with the solipsistic worldview. For the solipsist, there can be no universal revelation, because the possibility that we can even know that there is one God, one set of beliefs to which we all should adhere, and a set of moral instructions (like the 10 commandments) that we all should uphold is nullified by the very essence of solipsism.

This insular world of the solipsist allows for two closed possibilities: naive, narcissistic self-love or pessimistic nihilism. If I am a solipsist, I must either be radically convinced of my ability to issue my own code of moral conduct, which makes me just, or else, I must just sadly accept the fact that there is no possibility of justice in this world, at least none that I can possibly fathom. For I cannot see beyond the walls of my solipsistic universe. What can you contribute to me and what can I contribute to you if that is the case? The best thing people can do is use one another.

In sum, relativism tries to come across as humble, benign, and open, whereas the opposite happens to be true. Since relativism naturally reduces to subjective solipsism, it kills not only the possibility of accepting authority, but even the possibility of love and healthy relationships. It rejects the very grounds of religion and morals. So it stands to reason that as our culture becomes more relativistic, it will become more areligious (and irreligious). That in turn means it will become more narcissistic and amoral (or immoral) in the best case scenario; pessimistic and disparing in the worst of all possible worlds. That is, the rationalistic, isolated, closed-off world of “me and my relativism,” or should we just say solipsism.

The remedy? How do we resist the onslaught of relativism in our society, in our family, in our churches, and in our lives?

The answer consists in being true to our nature, which is meant to be open to something beyond and far greater than itself. In his discourse on Relativism as the central problem for the faith today, Ratzinger concludes with a hopeful note:

In man there is an inextinguishable yearning for the infinite. None of the answers attempted are sufficient. Only the God himself who became finite in order to open our finiteness and lead us to the breadth of his infiniteness responds to the question of our being. For this reason, the Christian faith finds man today too. Our task is to serve the faith with a humble spirit and the whole strength of our heart and understanding.