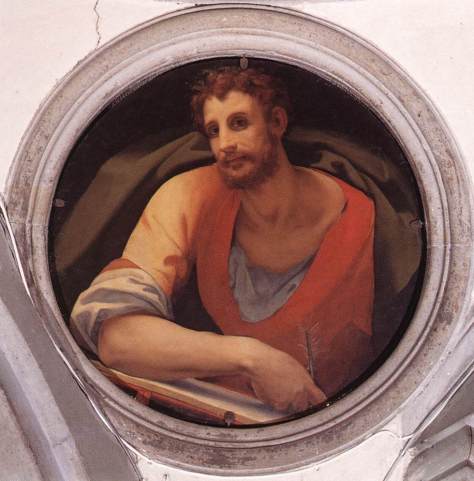 We first meet Mark in the Acts of the Apostles. Luke describes him as a young and restless man with a generous heart. Legend has it he was the one who ran away naked after losing his tunic during a skirmish with the temple guards the night Jesus was betrayed. If that’s true, Mark would have been just a kid when that happened.

We know this because Mark was a companion of Paul and in the account of Saint Steven’s stoning Luke refers to Paul as “a young man named Saul.” He had to be in his early twenties. When Mark first joined Paul and Barnabas, he was young, wishy-washy and immature to the point that Paul could not put up with him. Barnabas, however, always saw potential in Mark and refused to throw him under the bus. Thus we learn in Acts 15 that their disagreement over Mark’s suitability precipitated into a brutal dispute, causing them to part ways.

Barnabas wanted to take John, also called Mark, with them, but Paul did not think it wise to take him, because he had deserted them in Pamphylia and had not continued with them in the work. They had such a sharp disagreement that they parted company.

How much do we own Saint Barnabas for not counting Mark out? Not only did Mark persevere as an Apostle, he became a great evangelizer — one of the greatest in fact, the author of one of the four Gospels.

The young Mark had his setbacks and fears, yet for love of Christ he stuck with the Apostles of the early Church. He accompanied some of the greatest Apostles on their missionary journeys, most notably the Prince of the Apostles, Saint Peter. Eventually, he would once again rejoin the great Saint Paul, who wrote in his Second Letter to Timothy:

“Get Mark and bring him with you, because he is helpful to me in my ministry.”

Paul gave up on Mark as a kid. Thank God Saints Barnabas and Peter did not adopt that same attitude! Through their mentoring, Mark became a beacon of light for the early Church.

Saint Mark’s story thus teaches us an important lesson for today. Young people need to encounter Jesus Christ. When the Lord ignites the spark of faith in their heart, they make it their own and set the world ablaze.

Who can put it better than Pope Francis? (from yesterday’s Wednesday Audience):

To you, who are at the beginning of life’s journey, I ask: Have you thought about the talents that God has given you? Have you thought about how you can put them at the service of others? Do not bury the talents! Bet on great ideals, ideals that expand the heart, the ideals of service that will make your talents fruitful. Life is given to us not to jealously preserve it for ourselves, but so that we make a gift of it to others. Dear young people, have a great heart! Do not be afraid to dream big things!

These videos I shared recently let young missionary zeal speak for itself. So I thought I would share them with you again. Working with these kids during this past Holy Week was a gift and a grace for me. If you need proof that the Church is young and alive, you’re looking at it.

Special thanks to my missionary cameraman, RG Romero, for helping me to film, edit, and produce these videos.