Today, I decided to reblog an old post related to today’s Gospel reading on the destruction of the temple in Jerusalem. I added a simple but probably familiar poem at the end for further reflection on the transience of temporal things, which our liturgy invites us to consider this time every year as a perpetual reminder.

Shrine of Dominus Flevit overlooking Jerusalem from the Mt. of Olives

“I am waiting for peace.”

The store owner replied, “When the words of the Prophet in the holy book are fulfilled.”

Of course what he meant was, “When the world is converted to Islam.” Having understood that, and being fully conscious of whose turf I was on — the Islamic Quarter in the Old City of Jerusalem — I decided it best not to press on with this conversation.

The store owner, Isua, pulled me in to his shop seemingly just to chat (I already told him I didn’t have the money to buy one of his fine Mother of Pearl chess sets). He poured me a cup of turkish coffee and began to tell me his experience as an Syrian Arab living in Palestine. It was the third free coffee I’d had in the Islamic market that day.

The other two came about in the same way: a Beduin pulled me into his shop trying to sell me a silk scarf; an Palestinian teenager just could not be convinced that I did not want to buy a bong from him — or what ever that gigantic water pipe thing was. They all insisted on telling me their story and their stories all had one element in common. Strife.

That was my experience of the Islamic Quarter. The difference between that and the Jewish Quarter were like night and day. At first it seemed peaceful. No one was out in the street trying to pull you into their shop. Before long, it became clear they did not even want you in their shop. If you volunteeringly entered one of their shops, you got ignored; if you asked a question, you might not even get an answer.

Meandering through the Christian Quarter one quickly got the sense that you needed to “Just watch your step.” The Armenian Quarter was a ghost town. But you could always hear one word echoing off the ancient walls anywhere you stood in the Old City. And the word was: Strife.

Translation: Status Quo. If you’ve ever gone to the Old City of Jerusalem, you understand exactly what that means.

My pilgrimage to the Holy Land was not all that bad — in fact it was one of the most beautifully spiritual experiences of my life. I’ll never read the Bible or go on retreat the same way after having walked in the land where Jesus walked, visiting the holy sites and praying there. I believe every Christian should have this experience at least once in a life time. And the socio-cultural political experience is also part of the whole shebang.

I was able to piece this all together on the last day of the pilgrimage at the Shrine of Dominus Flevit (Jesus Wept). This holy site is recognized as the spot where Jesus stopped and wept over the City before his triumphal entry into Jerusalem, as the Gospel relates:

Hidden from our eyes, as under a veil; so is Christ’s Body  in the Eucharist.

As he drew near, he saw the city and wept over it, saying, “If this day you only knew what makes for peace—but now it is hidden from your eyes.” (Luke 19:41-42)

The large arched window in front of the main altar overlooks the Ancient City of Jerusalem, “City of Peace.”

The landscape is dominated by the gold-plated Dome of the Rock, which sits on the Temple Mount in the exact spot where the second temple fell, demolished by the Romans shortly after Christ died.

The window is adorned with symbols of the Christ’s passion: grapevines and thorns, a lone central cross, the eucharistic bread and wine offered at the Last Supper, and the rising sun as a hearkening of the Lord’s resurrection. The sun also sets, signifying that, like a grain of wheat, we must die in order to have new life.

I felt my pilgrimage to Jerusalem was complete, while contemplating our Savior’s words along with these symbol; looking back on my time there as I looked over the City of Peace. Everything that I experienced and was mulling over in my head all of a sudden made perfect sense. Christ came to establish peace — not peace as the world gives it but the eternal everlasting peace he alone can give. The city is still waiting for that peace. It missed it when He came to visit the first time, and still continues to miss it.

That city is the City of the World. We Christians who are in the world, but not of the world, belong to the true City of Peace, Christ’s Kingdom on Earth. Let us continue to pray that one day His peace will rule in the hearts of all mankind — on earth as it is in Heaven.

Jesus said, “All that you see here — the days will come when there will not be left a stone upon another stone that will not be thrown down.”

I met a traveller from an antique land
Who said: ‘Two vast and trunkless legs of stone
Stand in the desert. Near them, on the sand,
Half sunk, a shattered visage lies, whose frown,
And wrinkled lip, and sneer of cold command,
Tell that its sculptor well those passions read
Which yet survive, stamped on these lifeless things,
The hand that mocked them and the heart that fed.
And on the pedestal these words appear —
“My name is Ozymandias, king of kings:
Look on my works, ye Mighty, and despair!”
Nothing beside remains. Round the decay
Of that colossal wreck, boundless and bare
The lone and level sands stretch far away.’ 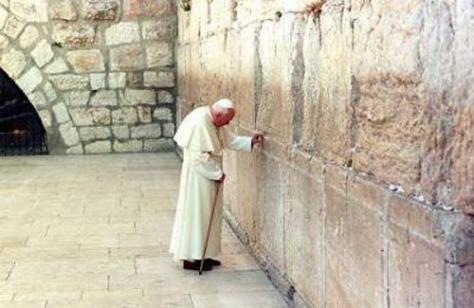