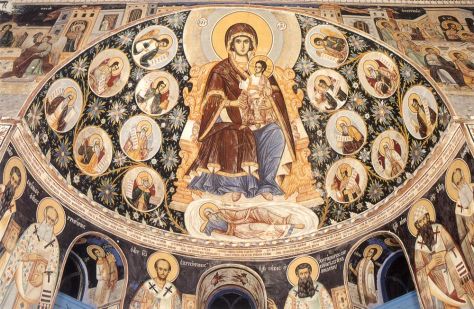 O Root of Jesse, standing as a sign among the peoples; before you kings will shut their mouths, to you the nations will make their prayer: Come and deliver us, and delay no longer.

Today’s O Antiphon stems from to verses from the book of the prophet Isaiah:

“A shoot shall come out from the stock of Jesse, and a branch shall grow out of his roots” Isaiah 11:1

“On that day the root of Jesse shall stand as a signal to the peoples; the nations shall inquire of him, and his dwelling shall be glorious” Isaiah 11:10

The significance of this O Antiphon is two-fold. First, it recalls our Lord’s genealogy as it was related at the beginning of the Gospel according to St Matthew. Second, the reference in this genealogy is to Jesse, not David, or Abraham, or Adam for an important reason. Jesse was the father of King David. Hence, this antiphon hearkens to the coming of the King.

What’s interesting about this antiphon and Isaiah’s prophesies, which inspire it, is that Jesus is both the root of and the fruit of the tree. How is this possible and what does it mean? 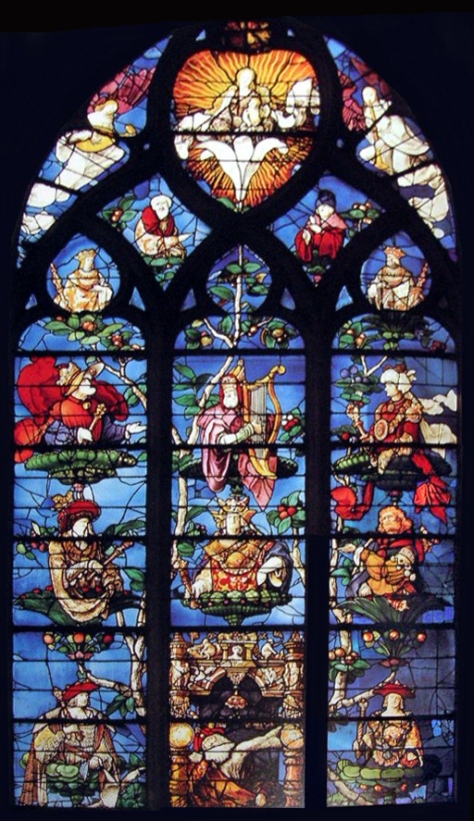 We can begin to unearth the answer by considering the account of Christ’s genealogy in the Gospel according to St Luke. There are two significant differences in Luke’s account.

Hence, Christ’s line descends from God the Father and ends with God the Son: God from God, Light from Light, True God from True God; Begotten not made, Consubstantial with the Father; Through Him all things were made;  Christ is the Alpha and the Omega.

Today’s antiphon, “O root of Jesse,” refers not only to his coming as a King, but also to his Incarnation, God’s coming to us as a man, the Word made flesh. It thus points forward, like the other antiphons in the series, to the last one, on December 23: “O Emmanuel,” God is with us!

Now, the genealogies of Christ in the Gospels follow Joseph’s ancestry and refer to him as Jesus’ father, because the father’s line, in ancient Hebrew culture, was the line of inheritance, and also Jesus was born in Bethlehem, because of the Roman census at the time of his birth, which required his family to register in the land of his father. This was to fulfill another important prophecy regarding the Messiah:

“But thou, Bethlehem Ephratah, though thou be little among the thousands of Judah, yet out of thee shall he come forth unto me that is to be ruler in Israel; whose goings forth have been from of old, from everlasting” — Micah 5:2.

Still, artistic representations of the tree of Jesse (where Jesse is portrayed as the root), include Christ’s mother in a very prominent role. This also, for two important reasons. 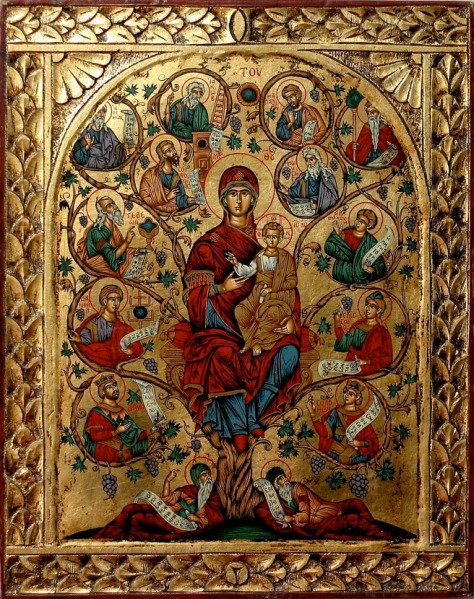 Matthew carefully ends his account of the genealogy pointing to the fact that Joseph was the husband of Mary, and “Of her was born Jesus who is called the Messiah.”

This is very important, since, Joseph was not the Lord’s biological father, as Jesus is the Son of God, Incarnated in the womb of the Blessed Virgin Mary by the power of the Holy Spirit.

“Thereby the prophet says that it is of her, who is descended from David and from Abraham, that He is born. For Jesse was a descendant of Abraham, the father of David; the descendant who conceived Christ, the Virgin, is thus become the ‘rod’. Moses too worked his miracles before Pharaoh with a rod; and among others too of mankind, the rod is a sign of empire. And the ‘Flower’ refers to His body, for it was made to bud forth by the Spirit.”

“The root is the household of the Jews, the rod is Mary, the Flower of Mary is Christ. She is rightly called a rod, for she is of the royal lineage, of the house and family of David. Her Flower is Christ, Who destroyed the stench of worldly pollution and poured out the fragrance of eternal life. As He Himself said, ‘I am a flower of the plain, a lily of the valleys”

As with all 7 “O Antiphons,” today’s antiphon invites us to reflect and ponder on our Lord’s long foretold coming and his Incarnation in Mary’s womb. For a brief explanation of the 7 “O Antiphons,” please see our Post on the Christmas Novena, and visit our other posts on the O Antiphons this week: