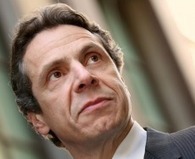 On the heals of a U.S. Appeals Court decision overturning a law violating Pro-Life Pregnancy Centers’ right to free speech in New York, Governor Andrew Cuomo comes out firing against Pro-Lifers in his own state.

This is what you get for opposing Governor Cuomo and his extreme agenda to eliminate all Pro-Life laws while expanding access to abortion throughout New York. You are lumped in with every other cause you may or may not agree with, branded as a radical extremist, derided, demonized, and denounced as an enemy of public interest. You are not welcome in His State.

If you read his full remarks, you will observe how he couches this tirade in terms of partisan politics. This is getting awfully close to fascism.

It isn’t odd, therefore, that the Governor issued his diatribe against the Pro-Life cause so close to the appeals court’s decision to strike down a New York City anti-pregnancy center ordinance, which one of the judges called “a bureaucrat’s dream.”

That ordinance forced pregnancy centers in the state of New York to “communicate city-crafted messages that encourage women to go elsewhere,” according to Senior Legal Counsel Matt Bowman.

If Governor Cuomo has his way, you must say what the government commands you to say or you are not welcome there, that is, if you support the right to life. Meanwhile, in San Francisco, if you try to express your freedom of speech by posting a Pro-Life banner, they would like to have you convicted of hate speech.

And we’re calling this a democracy?

One wonders what good the judicial branch of our government can do to balance out this quest to squelch all vocal opposition to the party that holds the power. On December 31, Supreme Court Justice Sonia Sotomayor, granted a temporary order for the Little Sisters of the Poor, which exempted them  from complying  with a part of President Obama’s healthcare law that  required them to provide contraceptive coverage, against their conscience. Immediately, the President calls foul, Justice Sotomayor is brutally attacked, and the Justice Department insists that the Little Sisters still must comply with the will of the state against their religious freedom of conscience, which ought to be protected by the Constitution.

No wonder Andrew Cuomo dares to speak not so softly — his party carries the stick and they are not afraid to use it. And guess who considers himself to be a strong frontrunner for the Democratic Party in the 2016 Presidential race? You know who.