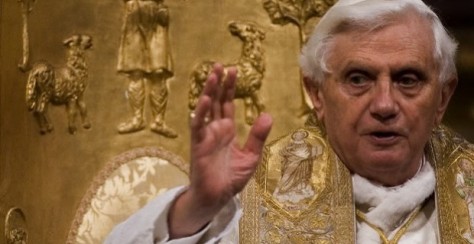 Today, Pope Francis invites us to remember Benedict, Pontiff Emeritus, in our prayers:

A year ago today, the pope shocked the world, when he announced his resignation. I remember how strong the reaction was and how those first impressions soon gave way to sadness. If you recall, it was almost as though the pope had died the day we watched his helicopter fly away from St Peter’s and disappear into the clouds.

I could empathize with the sadness, because it also reminded me of the last time we saw Pope John Paul II in public, less than a week before he passed away. I remember seeing him on his apartment balcony on Easter Sunday to give the world his traditional Urbi et Orbi blessing. He was visibly frail and wobbly as he attempted to raise his hand in blessing. I could see the heroic effort he made to speak, and no words came out.

I sat there stunned gazing at the screen, while my eyes teared up and the words quietly came out of my mouth, “Don’t Go!”

Such a short time had passed since we had already lost one beloved pope, we were not ready to see this one go too. So when we saw Pope Benedict leaving, I think we related it to the departure of Pope John Paul II. But in reality, it was not the same.

For one, Pope Benedict is still with us. Aren’t we happy for that? Yet in another way it was the same, because his departure was just as heroic as his predecessor’s. He had to be a man of great humility and courage to make the decision he felt he had to make. Though he knew it would startle and shock us, he did it anyway, because more importantly, he knew this was what the Church needed and the Holy Spirit wanted it.

When we look back on it now, our sentiments are probably different. As for me, the memory of Benedict’s departure is a happy one, followed by other happy memories. We got to follow him at his new, temporary residence at Castel Gondolfo. We got to see him side by side praying with his successor, whom we’ve come to love. We even got a co-authored encyclical form him and Pope Francis, within less than a year since the transition to the new pope.

And that’s not all. Today, as we join Pope Francis in praying for the Emeritus Pope Benedict, we should also remember him in a special way. I am personally fond of my memory when I saw him in New York during his visit the United States in 2008 and the very fatherly discourse he gave at St Joseph’s Seminary. I’m sure you have a fond memory or two of this lovable man. Take some time to relive it, thank God for giving us this pope, and say a special prayer for him, today.