Two inspiring stories popped up in the Biltirx InBox this week. First, LifeSiteNews.com reports that public awareness has caused Planned Parenthood to lament their worst year in their history. As the article explains, the pro-abortion group has had to admit numerous setbacks, due to growing public awareness about their misuse of funds and attempts to cover up sexual abuse crimes involving minors.

Second, World Net Daily ran a story about a public high-school student in West Virginia who convinced his entire class – including the teacher! – that abortion should be illegal, after watching the now famous 180 video. The high school senior explains:

This past week in our civics class we were writing essays about laws that we wish would change in America. After seeing this video I chose to do mine on abortion, and how I wished it would be illegal.

After I had finished reading my essay, a discussion arose in class (obviously) about how they thought abortion should be a choice, especially if the child is unhealthy or was caused because of rape … Because of 180, I was able to turn around the entire class opinion about abortion and by the end of the class 25 of the 25 students and my teacher as well had all raised their hand agreeing that abortion should be illegal.

Both of these stories illustrate how building awareness can bring about cultural change. The 180 video mentioned above is a great example of how just one man can make a lot of difference, by converting hearts and minds to the truth. Keep reading to find out how you can watch this powerful testimony for free!

First, here are five tricks that 180’s Ray Comfort uses in the video to overcome the Five Diversions to Cultural Conversion. Watch for them when viewing 180. 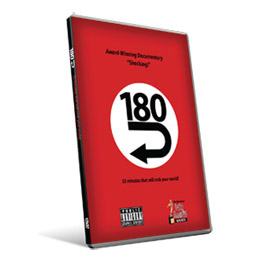 If you have not yet seen Ray Comfort’s 180, click here and watch it for free. If you have already seen it, watch it again (it’s 33 minutes long) or share this article with a friend, so he or she can watch it. As our high school senior friend who converted his whole class after watching this video showed us, the potential for conversions is limitless. The value of just one heart converted is limitless as well.