The other day, I was having breakfast with a priest from the Archdiocese of Boston, who told me about a bad experience he had while preaching about abortion. In the middle of his homily, one of the altar servers, a seventh grade girl, took off her robe, walked straight down the middle aisle, and left the church — for good.

The girl’s mother, being naturally concerned, brought her to speak with the priest afterwards. He tried to explain the Church’s position on abortion, but to no avail. Her only response was that she could not belong to a church that imposed intolerant moral views on other people.

Fortunately, not all 12 year old girls think this way. For example, the girl in the video below understands the abortion issue clearly.

You see, children can be just as reasonable, sometimes more reasonable, than adults even when it comes to complex moral issues.

The reason the altar girl walked out on her pastor’s sermon is not that she could not think for herself. She was certainly confident about her choice, but she did not have all the criteria and was also informed with the wrong criteria before her mind settled on one position — the wrong one, unfortunately.

Unfortunately, because this mindset will influence her future decisions.

Most young people say that they are personally opposed to abortion but they respect other people’s right to have an abortion. They say this when they themselves are not confronted with the reality of having to make the choice to have a child or to abort it, without reflecting on the possibility that one day they might have to make that choice. Every year millions of young girls, end up making a choice that they will regret for the rest of their lives.

Here’s a story from a young girl who laments having aborted her child. 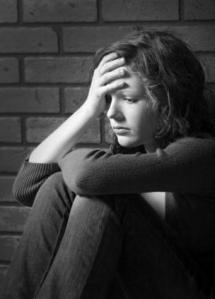 I was 16 years old when I got pregnant. I never thought that it would happen to me, and when it did I was in complete shock. I took multiple pregnancy tests, went to about 3 different clinics,  and they all told me the same thing that in fact I was 3 months pregnant. My mother knew something was up, and she would always say to me, “If anything is wrong you know you can talk to me.” I finally gave in and sent her a text while she was at work telling her that i was pregnant, and she told me to make an appointment for the abortion.

I was terrified sitting in the room crying my heart out knowing that I was about to kill my innocent child. Well, I got it , and now I’m not myself.  Every time I hear about giving birth i get weak and teary eyed. I’m depressed, and I often think, “What if I can’t have a child now?”  I don’t know what to think about myself any more.

You can read more moving stories like this one at teenabortionissues.com, where teens tell other teens why having an abortion is one of the worst decisions they ever made.

Do you believe in the power of reason? If so, then you should believe that young people know how to use their ability to reason correctly. True, young minds are vulnerable. They soak in information from the adults they trust, parents and teachers who ought to guide them in making the right choices.

The flip side is that once the choice is made and the decision executed, the person who made the decision is the one who has to live with it, because she does, after all, have the ability to think things through on her own, before, during, and after the fact. Otherwise, she would not feel tormented with guilt for having made the wrong decision in the first place. The problem is not that kids don’t know how to think. The problem is that, too often, we don’t think they do.

So should we be surprised when an 12 year old girl speaks so confidently and eloquently about the travesty of abortion?

Of course not. We should, however, be inspired by it. Young people are the heart and soul of the New Evangelization. We have to win them over and get them involved in this cultural battle if we are going to help them build a more hopeful future for themselves.

That’s why it is important to talk to young people about the issue of abortion and not to shy away from it or wait for them to come talk to you about it. For if they don’t hear it from you, who else will they hear it from and will you like what they hear?

Yet if you trust their ability to listen and understand what you have to say, they will trust you more for it. Don’t lose the opportunity.