This is a guest-post by Fr Edward Hopkins, LC

Last Sunday, July 1st, I gave a homily focused primarily on the theme of Faith, which seemed evident in the readings (13th Sunday, year B), but given our historical moment I felt moved to insert a few references to the HHS mandate and the current attacks on our freedom of religion.

The response of parishioners afterward told me that the message got through. More than one man simply said, “Home run, Father!”  A couple of women said they now felt that it was time for them to do something. One man added, “No one left early from this Mass!” A couple others began to discuss a “March on Washington DC,” this fall.

But the best of all, or rather the most indicative, was a woman (an Obama supporter) who was the first to follow me out of church and was fit to be tied.

She demanded to know how I could speak so boldly about this issue and yet how the Church could be so silent about priest abuse and Vatican scandals… but I couldn’t really engage her till I had greeted the rest of the departing  parishioners.

In the end, she waited and complained that I never gave the Church’s argument for opposing the Mandate (it wasn’t the point of the homily and the priests in this parish had been speaking about the issue for some time, since January, and now more intensely during the “Fortnight for Freedom”). She asked what my “goal” was (as if I had an agenda) and questioned how I could refer to the Bishop’s teaching or words since they had so lost credibility with their way of handling the priest abuse crisis.

I quickly discovered that she was not really looking for answers but just to wanted to complain. She probably felt “accused” by my homily (no problem there) and most likely is carrying some real grudge or hurt from her own past. I tried to be as reconciling and nice as I could, though I really would have liked to have gotten into it with her, enlightened, clarified, and made some stronger points… but it was not the moment, too many emotions in the air (incidentally, it was about 96 degrees outside the Church).

Eventually, another woman approached and began to defend me and insist that the homily was in fact about faith and that the HHS Mandate was something we needed to fight.

Well, I guess the message got across. I do wish I could have taken more time to visit with this woman. Sometimes people just need someone to listen to them. And we also have to be humble and admit that not everyone is ready to dialogue and that we can’t change hearts (only God can); though we can help to stir and awaken them. I hope that was the case for this disgruntled woman and pray God opens both her heart and mind.

Interestingly enough, the woman who came over to defend me later said she was still confused about the HHS Mandate: When did it come out? What was it, a law? Was it already in force? And just what does it demand? etc…

I think this is my big take-away: We have not spoken enough about this yet.

Many people have neither the time nor the place to find a clear explanation of the problem, the consequences, or the possible solutions. So I hope to find some ways to make this happen. There are certainly already some great resources but the overwhelming number of sites, information, reports, and misreporting just muddies the waters. So let’s see if we can simplify it for most people who are open and interested in understanding it and responding appropriately.

If you haven’t read it yet I recommend the Bishops’ most recent statement, “Our First Most Cherished Liberty”. It is perhaps the best summary to understand the threats to religious liberty, you might say the “context of the Mandate”.

A priest committed to Truth and Freedom 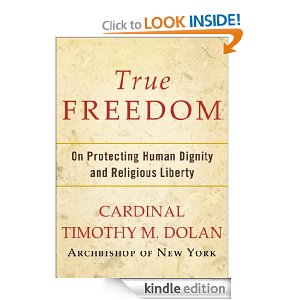