And your point is that….?

As self-explanatory as this meme is, I suppose my decision to share it here deserves some explanation.

I was recently invited to join a discussion group (on a certain social network) where “atheists and theists” could openly discuss their views on the question “Does God Exist?”. I knew what I was getting into, but I decided to join just to confirm my thesis that for some people — certain types of people — open discussion simply is not possible.

That all depends, of course, on what a person thinks “openly discussing their views” means.

I always find that militant atheists like to rant, not intelligently discuss topics in a polite and civil manner, in cases where they take a strong atheistic stance. They always begin with the prejudiced view that Christians are naively dumb. Then they back themselves up with straw man arguments that are usually vulgar, insulting, and tasteless, illustrating their inability to engage in intelligent discussion on the matter.

Note that I specifically chose to use the term “militant” atheist. I’ve known people who do not believe in God or who simply admit they cannot affirm or deny whether God exists. They are usually decent people to entertain a discussion with. They do not consider themselves to be the militant type of atheist.

The militant atheist is as dogmatic and irrational as the naive, fundamentalist straw-man he paints all believers out to be. Any attempt at reasoning with this type of person is like arguing with a stop sign until it turns green and says go. It ain’t gonna happen.

I am not going to share some of the offensive memes that were posted on this “discussion” page, because it would just infuriate my intelligent, good-willed readers. I will however share two things. First, I am sharing my opinion on this matter with the discussion group — with fear and trembling, mind you. I’m probably foolish for expecting anything less than a hostile response from the militant crowd (though I’ve observed that not everyone who participates in the “discussion” belongs to the militant crowd).

Second, I’d like to share a poem by Howard Nemerov that immediately came to mind this morning when I saw the meme I embedded above. Just something to chew on, not that it will lead to any intelligent discussion. Besides, it’s just a poem. 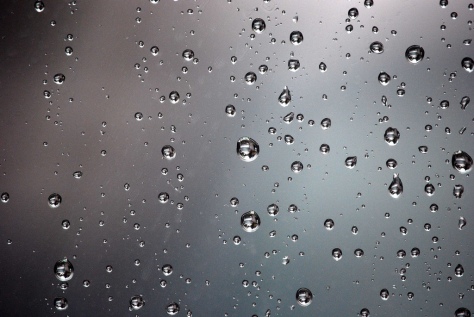 Angel and Stone, by Howard Nemerov

In the world are millions and millions of men, and each man,
With a few exceptions, believes himself to be at the center,
A small number of his more or less necessary planets careening
Around him in an orderly manner, some morning stars singing together,
More distant galaxies shining like dust in any stray sunbeam
Of his attention. Since this is true not of one man or of two,
But of ever so many, it is hard to imagine what life must be like.
But if you drop a stone into a pool, and observe the ripples
Moving in circles successively out to the edge of the pool and then
Reflecting back and passing through the ones which continue to come
Out of the center over the sunken stone, you observe it is pleasing.
And if you drop two stones it will still be pleasing, because now
The angular intersections of the two sets form a more complicated
Pattern, a kind of reticulation regular and of simple origins.
But if you throw a handful of sand into the water, it is confusion,
Not because the same laws have ceased to obtain, but only because

The limits of your vision in time and number forbid you to discriminate
Such fine, quick, myriad events as the angels and archangels, thrones
And dominations, principalities and powers, are delegated to witness
And declare the glory of before the lord of everything that is.
Of these great beings and mirrors of being, little at present is known,
And of the manner of their perceiving not much more. We imagine them
As benign, as pensively smiling and somewhat coldly smiling, but
They may not be as we imagine them. Among them there are some who
count

The grassblades and the grains of sand by one and one and one
And number the raindrops and memorize the eccentricities of snowflakes.
One of the greater ones reckons and records the times of time,
Distinguishing the dynasties of Mountains, races, cities,
As they rise, flower and fall, to whom an age is as a wave,
A nation the spray thrown from its crest; and one, being charged
With all the crossing moments, the coming-together and drivings-apart,
Reads in the chromatin its cryptic scripture as the cell divides;
And one is the watcher over chance events and the guardian of disorder
According to the law of the square root of n, so that a certain number
Of angels or molecules shall fall in irrelevance and be retrograde.
So do they go, those shining creatures, counting without confusion
And holding in their slow immeasurable gaze all the transactions
Of all the particles, item by atom, while the pyramids stand still
In the desert and the deermouse huddles in his hole and the rain falls
Piercing the skin of the pool with water in water and making a million
And a million designs to be pleasingly latticed and laced and interfused
And mirrored to the Lord of everything that is by one and one.

Annex:
To test the waters, I shared this quote on the discussion page:

Atheism deserves better than the new atheists whose methodology consists of criticizing religion without understanding it, quoting texts without contexts, taking exceptions as the rule, confusing folk belief with reflective theology, abusing, mocking, ridiculing, caricaturing, and demonizing religious faith and holding it responsible for the great crimes against humanity. Religion has done harm; I acknowledge that. But the cure for bad religion is good religion, not no religion, just as the cure for bad science is good science, not the abandonment of science.

and here is a sample of the response: 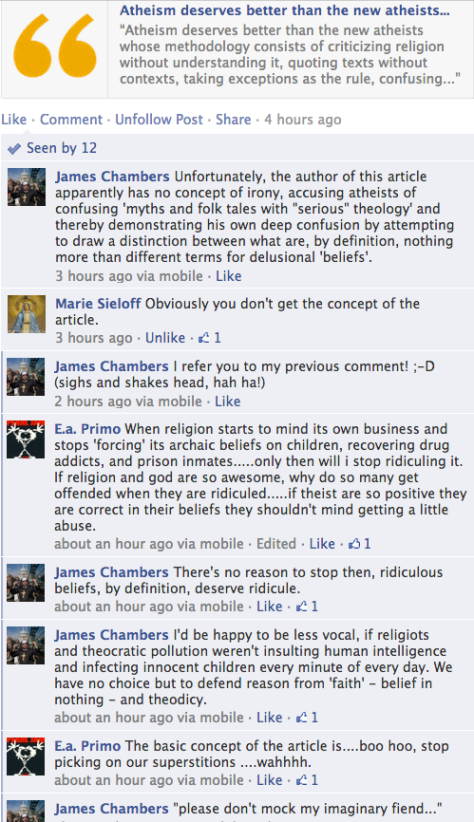 My point, again, was: Some people, you just can reach…